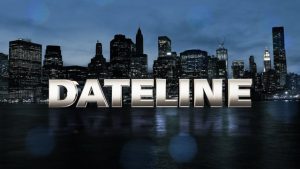 When the news was announced Dateline NBC reruns were being sold into broadcast syndication, the idea was…laughable. After all, since Cops broke the mold in 1992 and became the first reality show to be sold into off-network syndication, others came along and weren’t exactly successful (Rescue 911, Top Cops, America’s Most Wanted: Final Justice, Unsolved Mysteries, etc.)

Turns out syndicator NBCUniversal Domestic Television Distribution is getting the ultimate last laugh.

Dateline NBC – a show sold into syndication by NBCU this year after NATPE and at the last minute – is leading all new comers in the ratings race so far. Broadcasting & Cable did a piece on the show for its issue this week, and to yours truly’s surprise, the show has inched ahead of several new first-run syndication strips this fall, including Page Six TV and Daily Mail TV.

According to the magazine, Dateline NBC – simply titled Dateline for syndication earned a 1.2 household Nielsen rating in its first week on the air (Sept. 25- 29) and its weekend run earned a 2.2 rating.

Moreover, Dateline increased the time period rating and share for its Wednesday night airings on programming service My Network TV over the since-pulled Marvel’s Agents of SHIELD. Keep in mind times for My Network TV programming vary depending on what market you’re in. In Chicago, Fox-owned CW affiliate WPWR airs MyNet shows weeknights from 9 to 11 p.m.

An added treat for Dateline fans locally is three straight hours of Dateline airs Wednesdays from 9 to 11 p.m., in addition to the 11 p.m. syndicated weeknight strip (WPWR does not air Dateline on weekends.) Fox airs Dateline on its secondary stations in top markets including WWOR in New York and KCOP in Los Angeles, both carry MyNet programming. Midwest clearances for the syndicated Dateline include WNDY/Indianapolis, WWHO/Columbus, Oh., WADL/Detroit, and KSMO/Kansas City. As Broadcasting & Cable points out, the deal for stations is a sweet one – nine minutes to sell local advertising as opposed to five minutes for NBCUniversal to sell nationally, per hour in a straight barter deal. In some markets, Dateline is double-run with two episodes per day.

Originally debuting on NBC in 1992, the content on Dateline for syndication and My Network TV deals with the “true-crime” genre – known as the original “reality TV”. Here,  you won’t find trucks being rigged to explode or Chris Hansen luring unsuspecting sex fiends to suburban kitchens. Dateline – like many programs in the “true-crime” genre, deals with cold case murders, missing persons, and other subjects made popular by the syndicated Crimewatch Daily (now helmed by Dateline alum Hansen); cable’s Investigation Discovery and HLN; and diginets Escape and The Justice Network, the latter recently launching in Chicago over WGBO-DT 66.4. Recently, NBC’s Oxygen was rebranded as a destination for true crime stories – and launched its own branded version of Dateline.

The genre is very popular with the female 25-54 demo – and the appetite for such fare continues to grow. These types of programs have found a reliable home on Friday and Saturdays with the aforementioned Dateline and 48 Hours Mystery. Fueling the rise in “true-crime” programming was the popularity of Netflix’s Making a Murderer and Robert Durst’s The Jinx, a critical and ratings hit for HBO in 2015 (and the top TV show of the year on this website.)

This is the first time NBC News – through its Peacock Productions production unit – has produced a show in syndication in more than two decades. The last time it did so was in 1990 with Memories…Then And Now, a nostalgia-based weekly half-hour co-hosted by WNBC anchor Chuck Scarborough, farmed out to the former LBS Communications to sell as the financial interest and syndication rules prohibited the Big 3 broadcast networks from the business at the time.

A sampling of listings from fare coming up this Friday, October 20 in the true-crime genre as listed by Titan TV:

Dateline (syndication): An exclusive interview with Johnny Hincapie, who was convicted and imprisoned for 25 years after his alleged involvement in the 1990 murder on a New York subway platform.

Snapped (Oxygen): During an investigation, a man’s body is discovered in the snow next to his running vehicle at an apartment complex, which leads police uncover a secret marriage and an unlikely clue that leads to a suspicious ex-girlfriend.

20/20 on OWN: The case of a Texas-based gambling bookie and informant to law enforcement, who was charged with murdering his wife and was entangled in a story full of alleged betrayal, adultery and blackmail that culminated in murder, is investigated.

American Greed (Escape): A rags-to-riches CEO with the world’s largest privately-owned ranch soon presides over the world’s largest bankruptcy before he goes to jail; a producer rounds up investors for a nonexistent TV show about the Department of Homeland Security (originally aired in April on CNBC)

Inside The Mind Of A Serial Killer (Justice): Viewers are given a look into the murders of three Bradford women by Stephen Griffiths; Griffiths flaunted the murder weapon used to kill these women.