[Editor’s Note: Chance The Rapper stated in a tweet Tuesday he is not appearing on either ESPN specials, though ESPN’s PR release stated he would. Chance noted it was news to him he was in the lineup. This post has been updated to reflect the news. – T.H.]

Once again, Chicago violence is back in the national spotlight – and this time, with a sports angle.

On Thursday and Friday, ESPN is airing a town hall meeting live from the South Side YMCA in Chicago’s Woodlawn neighborhood, not far from where President Obama plans to build his Presidential Library, literally right across Stony Island Ave. from Jackson Park.

Thursday’s special titled An Undefeated Conversation: Athletes, Responsibility, and Violence is being taped at the YMCA this Thursday from 1 to 3 p.m. for airing later in the day on ESPN at 8:30 p.m.

The Undefeated is a recently-launched website from ESPN targeting African-American sports fans.

Jemele Hill, host of ESPN 2’s His & Hers, is anchor and moderating the show’s forums. Four panels are taking place, but will be hard to fit them into a 90-minute format. The focus is on issues regarding sports and race and how gun violence is impacting the conversation. Other issues being discussed include how athletes deal with racial profiling and activism.

On Friday, ESPN 2’s First Take will tackle issues regarding Chicago violence live from the South Side YMCA from 9 a.m. to 11 a.m., with guests Isaiah Thomas, , and Dr. Michael Eric Dyson, along with other community activists and leaders (and yes, expect Rev. Michael Pflager and Rev. Corey Brooks to appear.) First Take has undergone a recent co-host change, replacing Skip Bayless with Max Kellerman alongside Stephen A. Smith. It will be interesting to see the controversial Smith’s take on Chicago violence, assuming he shows up. 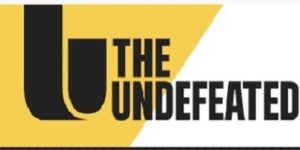 In a press release, ESPN Senior Vice-President and The Undefeated Editor-in-Chief Kevin Merida said “Sports are great builders in our country, bringing together people who think differently and live differently. Athletes, in greater numbers, have been saying they want to use their influence to drive social change. We hope this town hall will help push that conversation forward.”

ESPN’s arrival comes as Chicago is set to record more than 600 murders for the first time in nearly fifteen years and far and away have more homicides than any city in North America. More than 2,000 people have been victims of gun violence of the city this year alone.

This is not the first time a national program or network has featured Chicago violence in the spotlight. In 2007, CNN’s Anderson Cooper 360 aired a special on youth violence in the city titled 24 Hours In Chicago, weeks after Blair Holt was gunned down on a city bus. Far less productive was 2014’s Chicagoland mini-series on the same network, featuring a lot of Mayor Rahm Emanuel doing nothing.

Chicago violence has also been featured prominently on national news programs, broadcast and cable. And thanks to ESPN, now a sports connection.

ESPN’s recent foray into social issues involving sports has drawn criticism from many viewers, irritating those who are politically conservative and those who say the four-letter network should “stick to sports” (as the pathetic racist comments in this article attests.) Recently, ESPN simulcast a town hall meeting on gun violence with President Obama, and last month’s ESPY awards opened with four NBA superstars pleading for an end gun violence.

The sad part about this town hall meeting from a broadcasters’ perspective is ESPN being ahead of Chicago’s local TV stations when it comes to these vital community issues. Outside of the web and their local newscasts,  Chicago’s five news operations have done very little to address Chicago’s violence epidemic.

ESPN and WLS-TV are corporate cousins through The Walt Disney Company, but the ABC-owned station isn’t expected to participate in the YMCA town hall meeting.

Recently, CBS affiliate WGCL in Atlanta and  WAVY/WVBT  in Norfolk, Va. have addressed gun violence – the former in a two-hour special in prime-time, the other in prime access (early evening). Last month, WCIU aired a special edition of 26 N. Halsted in primetime about the strained relationship between minority communities’ and law enforcement.

The last time any Chicago news station addressed the gun violence or urban issues outside of newscasts was in May 2008, when WLS aired a half-hour special on the subject and CBS-owned WBBM-TV aired a Saturday night town hall meeting. Obviously, stations don’t want to be bothered by whiny social media trolls because the programming may have a liberal slant or upsetting “Bachelor Nation” because they’re favorite shitty TV show is being pre-empted.

As I said two years ago, local stations need to start earning their licenses – devoting mere two-minute sound bites on urban issues isn’t enough anymore. Letting ESPN come in here and examine a vital issue in local media’s own backyard – and doing a better job at it – is completely pathetic on local media’s end.  Keep that in mind the next time the National Association of Broadcasters tells you how “great” broadcasting is and boasts “how well we serve our communities”.