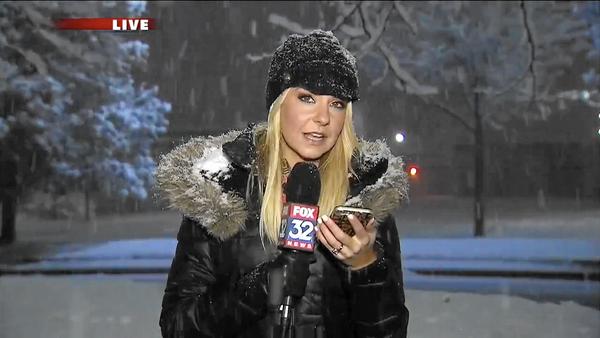 For once, it wasn’t WGN’s Morning News making headlines…but the other local morning news show – and not in a good way, of course.

As first reported by Robert Feder, an e-mail memo circulated by WFLD-TV news producer Dan Salamone stated the station’s female reporters on Good Day Chicago should not wear hats on-air while reporting on the field during the winter months. Salamone said he would make an exception “if it’s only 20 below”.

The story sparked outrage and even a comment from a reporter at a competing station. And it didn’t take long for the blogosphere to weigh in, as this woman pointed out the absurdity in “Some Dude at Fox 32 Telling Women They Shouldn’t Wear Hats in Freezing Chicago Weather While On Air.”

Feder rightfully declared Salamone “the dumbest TV executive of the year”, although given the absurdity of this business sometimes, it’s a good bet someone else will claim that title in due time (CNN boss Jeff Zucker hasn’t done anything dumb in 2016 yet.)

WFLD GM Dennis Welsh – who made news of his own a few weeks ago by ripping into embattled Chicago mayor Rahm Emanuel in an editorial, told TVSpy there was no policy regarding hatwear at the station – male or female, saying the e-mail was in “poor judgement”, and no ban would be in place. Welsh said disciplinary action would be taken against Salamone, though declined to specify what would that be.

Chicago viewers have long complained about reporters not bundling up while doing live shots in wintertime, so Salamone’s reasoning is quite bizarre to say the least.

Salamone came to WFLD last August from CBS affiliate WOIO-TV in Cleveland where news director Tom Doerr is also from. While at WOIO, Salamone used puppets – yes puppets – to reenact scenes from the public corruption trial of Cuyahoga county commissioner Jimmy Dimora after cameras were not allowed in the courtroom in segments called “The Puppet’s Court”, which this blog wrote about in 2012. Doerr has been news director of WFLD since February 2013.

The controversy is the latest embarrassment for the Fox-owned station, whose morning show is known for a revolving door of talent. Recent departures include Jon Kelley and Melody Mendez while Sun-Times columnist Richard Roeper and former WLS-TV castoff Mike Caplan became the latest addition to Good Day, which finishes either in fourth or fifth place, far behind the more established and buzzworthy WGN Morning News. WFLD’s noon and 9 p.m. news shows also trail the competition.

If you’ve read this blog for the last few years, yours truly has pointed out many of WFLD’s follies – including leading off a newscast with a Bears story instead of a major earthquake hitting Japan, leading me to declare Twitter’s “fail whale” as WFLD’s official mascot. And this was a few news directors and GMs ago.

This sorry episode just adds to the misfourtunes of what passes for news at WFLD.

And oh, about Hatgate? Maybe Salamone should visit a church in the Chicago area this Sunday. A lot of women who attend The House Of The Lord do indeed wear hats.