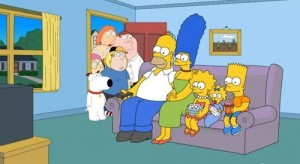 After a week where many of Fox’s new and returning shows tanked, the network received some much-needed adrenaline shots from two reliable standbys.

Aided by a football overrun (9.0), Simpsons scored a 3.9 adults 18-49 rating, up a whopping 144 percent from what the series earned for its season finale in May. In addition to a “major” character dying in the season opener, the series was helped by the twelve-day marathon, which drew tons of viewers to FXX and rejuvenated interest in the long-running series.  In other words, The Simpsons are far from dead, even at age 26.

Fox followed with Brooklyn Nine-Nine, which scored a series-high 2.6 rating, up 18 percent from what Bob’s Burgers earned in the slot last year.

But the night’s biggest standout was The Simpsons – real voices and all – appearing on Family Guy. The crossover earned a whopping 4.5 rating – the highest rated Family Guy in four years and was up 125 percent from last May’s season finale. The hour-long episode was Fox’s highest-rated entertainment show of the week and finished as the second highest-rated series of the week in the adult 18-49 demo, only behind The Big Bang Theory. Reviews of the crossover episode have mostly been positive; we may see another one of these down the road.

Meanwhile, ABC was no slouch either – the net scored with its Frozen-themed Once Upon A Time season premiere, finishing with a 3.4 demo rating and 10.2 million viewers, proving the Disney flick still has some punch. From there, it was all downhill with Resurrection earning a not-too shabby 2.5 rating and 8.4 million viewers, and Revenge scoring even lower, with a 1.5 rating, down nearly a full point from its lead-in.

CBS drew a lot of viewers to its Sunday lineup, but was unable to gain any traction demographically. A heavily hyped interview with President Obama on 60 Minutes drew 9.6 million viewers but only a 1.1 among adults 18-49. That was followed by Madam Secretary, which drew 12.7 million viewers, but only a 1.4 demo rating, still that’s up from its lead-in.

Last but not least, NBC dominated all comers with its Sunday Night Football matchup between the New Orleans Saints and Dallas Cowboys. Despite being a blowout victory by the Cowboys, the game earned a 8.7 rating and drew 22.6 million viewers.

All numbers are final; these are based on live plus same day figures.