Posted on July 11, 2013 by Terence Comments Off on Bob Sirott and Marianne Murciano head to WGN Radio full-time 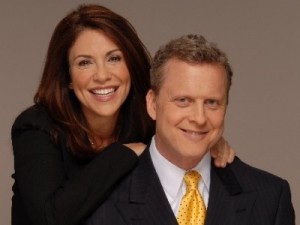 According to a post on Robert Feder’s Facebook page today, Bob Sirott and his wife Murianne Murciano are joining WGN Radio’s daily lineup.

The couple already have a Sunday night program on the station.

This is the latest move from program director Jimmy DeCastro’s continuing plan on making over WGN-AM’s schedule.

No timetable has been set on where or when Sirott and Murciano would be placed on the weekday schedule. Sirott currently co-anchors WFLD’s 9 p.m. weeknight newscast with Robin Robinson. According to Feder, Sirott’s contract expired on July 6 but was extended, while Robinson’s one-year contract expires in August. Currently, Mike McConnell holds down a 10 a.m. to 2 p.m. slot on WGN-AM with the 2 to 3 p.m. time period now occupied by a variety of guest hosts. Previously, McConnell’s shift was split with a one hour noontime show hosted by now-departed host Carol Roth.

With Garry Meier not going anywhere, McConnell’s show could be shortened to make room for Sirott/Murciano. On the other hand, McConnell could be also given his walking papers.

This would be Sirott’s second stint on the WGN weekday shift at the radio station: Sirott hosted a solo show in the noontime hour from 2007-10. 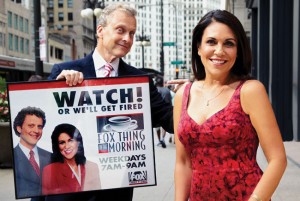 Both Sirott and Muricanno were teamed up on WFLD’s Fox Thing In The Morning beginning in early 1994 and was a modest hit. Their chemistry was so good, you can say it rubbed off on them -they married each other in 1999. In an-ill fated move however, Murciano was replaced by Tamron Hall, as Fox Thing lost ground to WGN-TV’s surging morning show. Sirott exited the station and later joined WTTW’s Chicago Tonight.

Bob Sirott has been a remarkable 40 years in Chicago media, including stints at WBBM-FM (where he began his career), WLS-AM, and television work for four Chicago stations. He was also a correspondent for CBS News’ West 57th in the 1980’s.