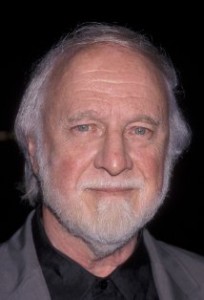 Acclaimed science-fiction writer Richard Matheson died last week, according to a statement his family released via a protected Facebook account. Matheson was known for many short stories, including I Am Legend, which was adapted into several screenplays over the years (the latest version starred Will Smith.)

In TV circles, Matheson wrote several episodes of the first Twilight Zone. Among the best known episodes he penned included The Last Flight, Steel, A World Of Difference, and most famously, Nightmare At 20,000 Feet. Matheson would reunite with Rod Serling in 1971, writing two episodes of Night Gallery.  Matheson also penned a story for the second version of Twilight Zone in 1986, credited as “Logan Swanson”.

Other TV credits included Wanted: Dead Or Alive; Have Gun, Will Travel; Lawman; Alfred Hitchcock Hour; The Girl From U.N.C.L.E.; Circle Of Fear; miniseries The Martian Chronicles; and Star Trek episode The Enemy Within.

Many writers were inspired by Matheson’s work, including Stephen King and George Romero, whose zombies in his Night Of The Living Dead movie were inspired by the vampires in The Last Man On Earth, a 1964 adaptation of I Am Legend. Science fiction writer Ray Bradbury (who died last year) said Matheson was “one of the most important writers of the twentieth century.”

Among accolades Matheson received were the World Fantasy Award of Life Achievement in 1984 and the Brad Stroker Award from the Horror Writers of America in 1991. Matheson was inducted into the Science Fiction Hall Of Fame in 2010.