Posted on May 28, 2012 by Terence Comments Off on T Dog’s Think Tank: Dan Harmon, “Community”, their fans, and you 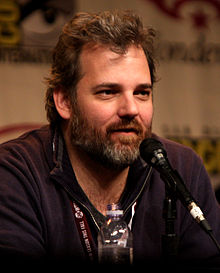 As you know by now, Community creator and executive producer Dan Harmon was fired by the studio who produces the show (Sony Pictures Television) on the evening of Friday May 18. I’m sure you’ve read the reasons why he was fired, including from Harmon himself. Fans of Community took to social media and the Internet to express their outrage over his dismissal, while TV critics ripped the move mere hours after it made news. Disgruntled Community fans took to the streets here in Chicago, even smashing a window at NBC5’s ground level studios (okay, that was actually related to a NATO protest, which there was a lot of that weekend.)

Welcome to the media business in 2012. Or any year.

Seeing the Milwaukee native getting the ax from Community didn’t surprise me, since the guy was a polarizing figure on-set, with his constant run-ins with studio and network executives and with Chevy Chase, who was last funny was in 1989.  Harmon also clashed with Sony over the creative direction of the show, which averaged four million viewers during the 2011-12 season, getting clobbered by heavyweights The X Factor, American Idol, and The Big Bang Theory in its Thursday night time slot. But judging by all the love the series receives online and on social media, you know Community has more fans than the Nielsen ratings let on, meaning many viewers aren’t watching the show live – instead, they’re watching via DVR, Online, Hulu, iTunes, and other alternative platforms – something Nielsen hasn’t even figured out how to measure yet (that’s another rant for another day.)

But despite all the wailing from fans, this kind of treatment isn’t new. In fact, showrunners fighting with studio and network execs have been around since television was invented. Twilight Zone creator Rod Serling feuded with CBS executives – particularly network president James Aubrey – over cost overruns incurred by the show. During Zone’s second season (1960-61), Aubrey slashed the show’s budget, which meant reducing the episode order and even shooting six shows on videotape – a move Serling disliked (when those videotaped episodes were transferred to film for the first few syndication cycles of the show, the quality was really, really subpar. The actual videotaped episodes are now in syndication.) CBS canceled Zone twice – once after the third season and for good after the fifth.

But life goes on. The shows went on after the main voice left. The West Wing survived without Aaron Sorkin. M*A*S*H survived when Larry Gelbart departed. Growing Pains and The Wonder Years continued after the departure of creators Neal Marlens and Carol Black.

All I’m saying is, this is all part of the game, no matter how unfair it is, and its been that way since Milton Berle was shilling for Texaco back in the ’50’s.

For Community, Harmon’s departure is just another hurdle in what is expected to be quite a rough fourth season for the low-rated show. Community this fall is slated to be paired with Whitney in the first hour of prime time on Friday night – a time slot where NBC hasn’t had a hit sitcom since Sanford and Son and Chico and the Man in the mid-1970’s.

And its these low ratings – which Community has struggled with for three seasons – were the reasons for Sony’s concern. With the series renewed for a fourth season,
Sony wanted Harmon to broaden the series to attract more viewers. Harmon refused, thus he was axed.

But the timing of the firing – on a late Friday night around 11:30 pm Central Time, or so – was an attempt to bury the story while the weekend was just underway – a really sneaky move. It’s akin to the Colts sneaking out of Baltimore in the middle of the night and moving to Indianapolis.

But this saga just reminds us how much the business has changed. Certainly, the cult-like following showrunners Harmon and others such as Seth MacFarlane, Tyler Perry, Shonda Rhimes, and Joss Whedon (who is now in feature films) are enduring wasn’t even thinkable back in the day. In the 1960’s and 1970’s, Paul Henning (who ran The Beverly Hillbillies, Green Acres, and Petticoat Junction) and Jack Webb (Adam 12, Dragnet, and Emergency!) hardly had any kind of following, and neither did Garry Marshall or Norman Lear, though they were a little more well-known. The rise of the Internet – and particularly social media – has put fans in touch with the people who crank out the content (of course, when the program stinks, they can hear from them as well.) And this has yours truly scared, as this puts more pressure on those who create and write material.

While there was a lot of outrage online, not everyone on the Internet was up in arms over Harmon’s dismissal. On one message board, a dissenting poster summed up Community’s renewal and their fans like this: “NBC is dumb enough to listen to a very small and very vocal group of fans online that love Community.” Another person in the same thread asked why Community was renewed “with a 1.0 [adult demo]rating and 2 million viewers?” In fact, this particular board was one of the few on the Internet that didn’t go apeshit when news of Harmon’s firing broke. There’s your fair and balanced.

Another thing is how TV critics have fawned over Harmon and Community over the last few years. Though yours truly doesn’t really have a problem with this, such bias could cloud judgements. For example, one critic even suggested that Harmon’s bad behavior didn’t matter and both Sony and NBC should just suck it up. But what critics are forgetting is the job of a showrunner is no different than a CEO running a multi-million dollar corporation overseeing 200 or so employees, or hell, even a manager running the local Jewel or Kroger. If board members don’t like you or what you’re doing for any reason, you can be replaced. That’s business. This is not politics, where partisan showmanship is the name of the game and there’s no longer any middle ground. Harmon refused to compromise with studio executives, so they reached an impasse, and cut him loose. Blaming the entire Harmon debacle on network and studio execs is total bullshit.

While yours truly is a huge supporter of the creative community and always will have the backs of content creators and writers (I’m one myself), you also have to take a look from the business aspect of it. After all, I don’t possess a Bachelor of Science Degree in Business Administration for nothing (but these days, the paper printed on those degrees are often worth more than the degree themselves.) I’ve followed the media business since I was twelve (since 1985), and I knew even then it was a business – a cutthroat one at that. Every Community fan and TV critic should read Three Blind Mice: How The Networks Lost Their Way by Ken Auletta – a book I read three times – and they would get a better understanding of how this business is run and stop acting shocked and surprised when shit likes this happens – because as Ken Levine pointed out recently, it happens all the time.

So, should Community been canceled instead? Since it was at 71 episodes, NBC was going to renew it anyway, since it was in its third season and needed to reach at least 80 episodes for syndication, making this “Save Community” campaign a bit of a waste. The show was picked up by Comedy Central for fall 2013, and sales to broadcast TV stations are pending, most likely on a barter basis. But I don’t see a station such as WPIX or KTLA stripping Community at 7:30 p.m. every night. The show is going to be treated like time-period filler, likely headed for many post-midnight time periods slotted between reruns of aging shows and infomercials featuring Montel Williams pushing Whopper Choppers.

And while Sony is getting heat for canning Harmon, don’t let NBC off the hook, either: the network never should have let the series parish opposite Big Bang on Thursday nights for the last two seasons. A more ideal time slot would’ve been one on Tuesdays or Wednesdays, where the sitcom competition is lighter. And pairing Community on low HUT level Friday night with non-compatible Whitney is perhaps the dumbest move I’ve seen in years. This doesn’t help NBC one bit – keep in mind the network’s image is still damaged from the Conan O’Brien-Jay Leno debacle of 2010.

So in a nutshell, fans of Community should be blessed to see the show next season and with the series reaching syndication, the wacky folks at Greendale Community College should be around in reruns for years to come. But look at all the crap they had to get through just to get that fourth season. But with Harmon gone, you wonder if it was worth it.