Posted on February 25, 2012 by Terence Comments Off on The Grab Bag: Conan, “Archer” receive contract extensions 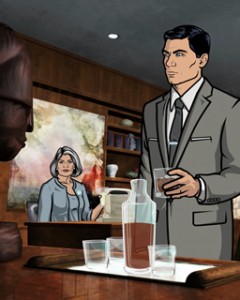 – One up, one down: Archer just received a vote of confidence from FX as the cable net green-lighted the animated series for a fourth season for thirteen new episodes. Ratings for the show in the Thursday night time slot are up 32 percent in total viewers and 62 percent among adults 18-34. In addition, the show’s creators (Adam Reed and Matt Thompson) received a two-year contract extension to stay with Archer and develop new comedy programming for FX through the duo’s Floyd County Productions. Both Reed and Thompson were the creators of Adult Swim’s Sealab 2021, a tongue-and-cheek reboot of failed 1972 NBC Saturday morning cartoon series Sealab 2020.

– Meanwhile, the news wasn’t as good for Good Vibes: the animated surf n’ turf series received a pink slip from MTV. Vibes often dropped half of its Beavis and Butthead lead-in. Speaking of B&B, the revival of the 1990’s series has been deemed a ratings disappointment in some circles (despite drawing over three million viewers when it returned October 27), and its future hasn’t been determined yet.

– Like FX, TBS was also in a contract-extension mood as it gave late-night host Conan O’Brien a two-year extension through April 2014. Despite losing an average of a million viewers since premiering in November 2010, Team Coco has managed to remain competitive with Comedy Central’s duo of Jon Stewart and Stephen Colbert in the key adults 18-34. Meanwhile, Conan is planning another trip to Chicago to tape a week of shows this June.

– But apparently, not everyone is getting an extension – all-news outlet WIQI-FM let three of its staffers go this past week due to restructuring. The three who were released are industry veteran Scott Miller; reporter and northwest suburban bureau chief Annie Kelly; and news writer Karen Gollrad. In the January 2012 PPM survey, WIQI grew 25 percent month-to-month, but still has a long, long, long way to go to become competitive.

– Here’s at least two more reasons why the major nets’ prime-time ratings have hit the skids as of late. Going into the NBA All-Star break, regular-season Chicago Bulls games on Comcast SportsNet Chicago are up 45 percent in households from the first-half average last season with an average 5.9 rating. The tally includes a record 8.7 rating for the Bulls-Pacers game on January 25 (Chicago Blackhawks games have also been packing ’em in on CSN, despite a recent nine-game losing streak.) Meanwhile, the red-hot Detroit Red Wings scored a 8.3 household rating Thursday night on Fox Sports Detroit with a game against the Vancouver Canucks, who snapped the Red Wings’ NHL record 23-game home winning streak. The tilt was the highest-rated regular season game in the Motor City in eight years.

– Remember back in October when yours truly mentioned about a potential conflict regarding Steve Harvey’s moolighting as a syndicated talk show host for NBCUniversal this fall while continuing to host Debmar-Mercury’s Family Feud, which is also in syndication? Well, believe it or not, there’s actually precedence for this: while continuing to helm Warner Bros.’ Love Connection game show strip, Chuck Woolery also hosted a daytime syndicated talk show for Group W in the fall of 1991, which lasted just three months.

And just how yours truly was reminded of this? Well, I came across this rather interesting article posted at the TVorNotTV Google Groups. Woolery talks about racial discrimination and the civil rights era.

Wow. Rosa Parks and Dr. Martin Luther King made a stand against injustice and changed American history forever.  What was Chuck Woolery’s contribution to American culture? A stupid dating show and a boring talk show. That pretty much speaks for itself. Hate to think what Woolery has to say about New York Knicks player Jeremy Lin if he had a Twitter account (and many in the media have said some rather stupid things about the Asian NBA player in the last few weeks.)

Safe to say no one will be naming a street or museum after Chuck Woolery anytime soon.