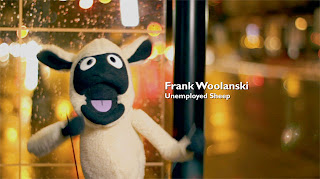 In news first reported by CRM yesterday, Tribune-owned WGN-TV announced it was rebranding its late fringe sitcom block as WGN Night Cap, and its being hosted by a puppet named Frank Woolanski beginning this Monday. Every night, he’ll appear in bumpers between the station’s sitcoms from 10 p.m. to 1 a.m. (Woolanski will not appear on WGN America.)

WGN currently airs Family Guy, Two And A Half Men, Entourage, Friends, According to Jim, and Curb Your Enthusiasm in late fringe. This fall, WGN plans to add new off-net sitcom 30 Rock to the block while Entourage and Curb exit the station’s schedule as both off-HBO series are being pulled from broadcast syndication due to low ratings. WGN and other Tribune who currently air Friends recently extended their contracts to air the series through 2017 – and is being made available in HD beginning in 2013.

This comes as Tribune – a company still mired in Chapter 11 bankruptcy – is trying to find ways to attract viewers to its languishing station group. Recently, CW affiliate KIAH-TV in Houston rebranded and revamped its local newscasts as News Fix; and the company’s My Network TV affiliate in Seattle (previously known as KTZZ-TV) changed its call letters to KZJO and rebranded itself as “Joe TV” in September 2010 with four animated series airing back-to-back from 5 to 9 p.m. weeknights branded as Cartoons From Hell. Similar to these two efforts, WGN is already using social media to promote Frank Woolanski via Facebook, Twitter, and through WGNTV.com.

So you’re asking – who is Frank Woolanski? According to his Facebook page, he says he is an unemployed “sleep induction specialist” and he lost his job because he couldn’t put people to sleep (he should’ve got a gig anchoring the local news instead.) He’s a native South Sider (a plus… as far as I’m concerned ), and is into ’80’s hair-metal bands. He also claims his great-great-great Grandpa’s wool was made into a jacket for mayor Richard J. Daley. His favorite foods are deep-dish pizza (of course) and Dr. Pepper (which coincidentally is a sponsor of WGN Night Cap.)

While he may not be able to top Svengoolie and Bozo as Chicago’s best-known fictional character – at least not yet, the sheep is already funnier than Leno and Letterman.

Did you know? WGN did air a late-night talk show before – but it wasn’t successful. In January 1992, Tribune launched the short-lived The Dennis Miller Show, and after months airing at 1:30 a.m. (after the station’s late movie), WGN moved the SNL alum to 10:30 p.m. in June 1992, replacing Hunter reruns. After drawing even lower ratings than it did at 1:30 a.m. (and lower than the show it replaced), Tribune decided to pull the plug on Miller in syndication after seven months.