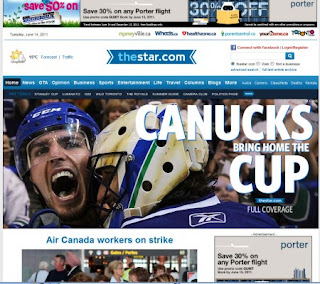 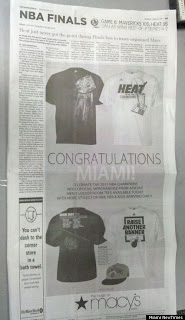 Yep, it’s been a week of mistakes for some – ask the Miami Herald and the Toronto Star who declared some teams champions last week when they weren’t, and for anyone who went into Downtown Vancouver Wednesday evening. It’s not just some bizarre universe where Dewey defeated Truman for President – nope, it’s another edition of T Dog’s Six Pack (actually, it’s seven…):


NBA Finals and Stanley Cup Finals rock the house. The six-game NBA Finals and the seven-game Stanley Cup Final were rating smashes: The Mavericks-Heat series drew an average of 17.3 million viewers, with 23.9 million tuning in for the sixth and deciding game, in which the Dallas Mavericks won their first NBA title. Meanwhile, the seventh and deciding game of the Stanley Cup Final between the Vancouver Canucks and Boston Bruins drew 8.54 million viewers for NBC in the U.S. and a record 8.76 million for the CBC in Canada, making it the most-watched NHL telecast in the country’s history. The Bruins won their first Cup title since 1972.

Oprah Winfrey. The last first-run episode of her long-running talk show drew 16.4 million viewers and an 11.5 household rating- the most watched episode of the show since 1993. Congrats, Oprah! (on the other hand, she has a lot of work to do to try to get viewers to watch her newly-launched OWN network.)

WLS-FM. Remember when the 94.7 frequency would go through some kind of a format change at least every two years? – Well, WLS is having its biggest ratings success since the early years of the WYTZ/Z95 era.  In the May PPM survey, the oldies outlet finished as the second-most listened music station in Chicago, and finishing first in the 35-64 demo – not  to mention burying newcomer K-Hits (WJMK-FM).

Power 92. After firing its three most popular radio personalities and finishing in a tie for 27th place overall (and 12th among its target 18-34 audience) in the May PPM survey, it’s time to write off Power 92 as a lost cause. New slogan should be “Power 92: #1 as a Major Fail In The Streets”.


TV Critics blown away in the Windy City. With Paige Wiser’s forced departure from the Sun-Times, Chicago’s two major newspapers are left without a full-time TV critic for the first time in recent memory – a huge loss for the medium locally.


LeBron James. Oh what class you show on – and off the court. Ripping the fans who hate you saying they have “miserable lives” was classic. Yes, we “miserable people” don’t have championship rings… oh that’s right LeBron… neither do you. What an asshole.

Vancouver. Speaking of assholes, Canucks fans booed the Boston Bruins’ Stanley Cup Presentation Wednesday night and acted like a bunch of assclowns with a post-game riot, which included breaking windows, setting fires, and looting stores. These morons gave Vancouver a black eye and made the city they live in the butt of jokes around the world (something Chicago is used to.) LeBron James would be a perfect fit up there – if Vancouver still had a basketball team, that is.