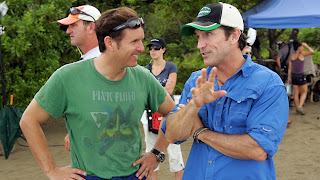 The Emmy Award-winning host plans to cover a wide variety of topics from newsmakers of the day to families and individuals facing challenges (like having to put up with Probst for an hour?) The series is targeted for daytime and early fringe time periods – the same ones Disney/ABC is targeting for Katie Couric’s new talker, also set for September 2012.

“There’s no one else in daytime TV like Jeff Probst. He is interested in finding the answers to the same questions our audience is asking, which makes him relatable to both women and men,”according to John Nogawski, President of CBS Television Distribution. Adds CTD’s Programming and Development head Aaron Meyerson: “Anyone who has seen Jeff on Survivor knows how he connects with people, and has an instinct that makes him a natural and compelling host for daytime. With the same adventure Jeff approaches his own life, the show will take the same path. Whether it’s a newsmaker-of-the-day, a celebrity or ordinary folks, Jeff will go further than typical discussion. The show will cover a range of topics from relationships to human interest. And like Jeff, the show will encourage action, change and discovery.”

Probst will continue to host Survivor and serve as executive producer of the show.

CBS’ decision to add Probst to its roster of first-run properties comes as the company’s Oprah Winfrey Show ended its run in May after 25 years. Probst will be competing with not only with Couric for time periods, but also newcomers Ricki Lake (which is actually a return) and Anderson Cooper, whose show debuts this fall. Probst could catch a break: CTD has yet to announce renewal plans for talker Rachael Ray, whose contract is up next year.

Probst has proven to interact really well with guests, particularly with Survivor contestants during those live reunion shows. But should saucy topics – like paternity tests or mothers who sleep with their teenage daughter’s boyfriends – should ever come up, keep in mind Probst is more than qualified to handle wild guests – he’s had to put up with Johnny Fairplay, Russell Hantz, NaOnka, and Phillip, didn’t he?