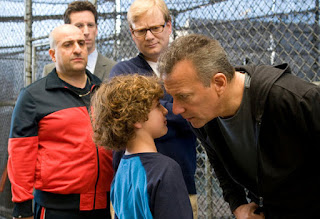 Welcome to the Shame, Paul

This program needs no waiting to get into this museum.

After two forgettable and ultra-low rated episodes, NBC has canceled The Paul Reiser Show – not to mention an express induction of The T Dog Media Blog TV Hall Of Shame.

The series was a part of NBC’s once-formidable Thursday night lineup. When it premiered on April 14, Reiser averaged only 3.3 million viewers and a 1.1 ratings in the 18-49 demo – achieving the lowest performance ever for a premiere of an NBC prime-time series, even lower than turkeys Pink Lady and Jeff and Supertrain. When the series sunk to 2.5 million viewers and an 0.9 rating, it was basically over.

The premise of the universally-panned series was this: former Mad About You star Paul Reiser starred in this blatant rip-off of HBO’s Curb Your Enthusiasm as himself trying to return to television after a years-long hiatus, and enlisting his friends to help him find “the next big thing”. Oddly enough, Curb’s Larry David appeared in the premiere episode.

Are you laughing yet?

After viewing the premiere episode on Hulu, yours truly didn’t think a sitcom would get as worse as Hall of Shame member Secret Girlfriend, Comedy Central’s comedy abomination which went six episodes before it got canceled in late 2009 (which yours truly also deemed as the worst sitcom of all time.) While Reiser lacked in plot and dialogue – and made unfunny jokes for the sake of making unfunny jokes – Secret Girlfriend gets a slight nod over Reiser since the “comedy” was quite crass, written poorly, and had an even more pointless plot.

And so, Paul Reiser’s series is already a member of The T Dog Media Blog TV Hall Of Shame, following recent inductees in the Contemporary Division, including The Cape and Perfect Couples, the series Reiser replaced.

In fact, the last three inductees have all been new NBC prime-time shows. Despite Comcast’s recent takeover of the peacock network, the stench of the Zucker era still hangs over like second hand smoke at a bar.

Here is the official TV Hall of Shame entry:

– The Paul Reiser Show (NBC, 2011) Oh, Paul. Did you really think you were funny, talented, and charming enough to headline your own sitcom, let alone a concert in the parking lot of the local Blain’s Farm & Fleet?