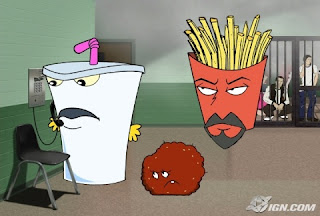 Can a sequel work with an existing cast of a TV show? Adult Swim is gambling it could.

On Wednesday, Adult Swim and the producers of Aqua Teen Hunger Force announced the veteran series is undergoing both a format and a name change. When the series returns to the lineup on May 8, Hunger Force will now be known as Aqua Unit Patrol Squad 1 and the three principals on the show – Master Shake, Frylock, and Meatwad – will become detectives (Carl is also expected to come along for the ride – I guess he just loves being annoyed by them.)

With the format and title change, Aqua Teen Hunger Force has ended (though unofficially), and thus becomes a sequel or a continuation of the original series.

The detective plot was actually an original premise of the series and was even pitched to Cartoon Network executives in that manner. But the premise was dropped three episodes into its run, and the eleven-minute series became more Seinfeld-like – a show about “nothing”… or to put it more precise, the characters hang out in a New Jersey rental and stuff “happens”.

Aqua Unit will have a new theme song performed by Queens of the Stone Age’s Josh Homme and a new setting (maybe) – Seattle, home of Fraiser Crane.

Aqua Teen began on Adult Swim on December 30, 2000 and is the network’s longest-running show. In 2007, the series made it to the big screen with The Aqua Teen Hunger Force Colon Movie Film for Theaters – three months before The Simpsons Movie opened worldwide. A promotion for the movie went awry in Boston as officials mistook Lite Brite LED signs featuring one of the show’s characters as incendiary devices.

While you can’t fault Adult Swim for freshening up a series has been on the air for over a decade, the sequel does carry a significant risk –  the potential of alienating the series’ longtime fans if they find the changes too radical.

The last time a sequel in this manner succeeded was in 1979, when All in the Family converted into Archie Bunker’s Place. During this time, the basis of the series shifted from the Bunker household to Archie Bunker’s bar and the series underwent numerous changes during the duration of the series’ run, including the departure of series’ regular Jean Stapleton midway through the first season – necessitating in writing out her Edith Bunker character (through the second-season opening episode Archie Alone in 1980.)

Bunker was a surprise success in its Sunday night 7 p.m. (CT) time slot in the fall of 1979 and beat hot ABC sitcom Mork & Mindy, which aired on Thursday nights a season earlier. Bunker ran on CBS for four seasons.

In 1968, Andy Griffith and Ron Howard exited CBS’ top-rated The Andy Griffith Show. But much of the cast was retained, and with the addition of Ken Berry, Andy Griffith became Mayberry R.F.D. Regularly placing in the top twenty, the series ran until 1971, when CBS dumped practically all of its rural-themed shows.

On the other hand, other sequels or continuations failed to click with viewers: After M*A*S*H concluded in 1983, CBS decided to air a sequel to the series simply named AfterMASH. While it did finish as a top ten show during the 1983-84 season (airing in the Monday night time slot M*A*S*H held for years), a new night and a time period switch the following season proved disastrous, and the series was canceled in December 1984.

Even less successful was The Sanford Arms, a continuation of the NBC hit series Sanford and Son, which ended its run in 1977. The sitcom was destined to fail without Redd Foxx and Desmond Wilson, and Arms was an early casualty of the 1977-78 season. Foxx did return in yet another sequel, Sanford on the same network in 1980. It lasted longer than Arms did – ten months.

In 1986, syndicator D.L. Taffner Ltd. decided to revamp syndicated first-run sitcom Too Close For Comfort into The Ted Knight Show, but the star died shortly after production of the show’s first and only season was completed.

While this series didn’t change its name, the format did: Gimme A Break received a complete cast overhaul at the start of its sixth season (retaining only Nell Carter, Telma Hopkins and Joey Lawrence), with a new New York City locale. After being moved around the schedule a few times, Gimme A Break was canceled by NBC in May 1987.

Will fans of the Aqua Teens follow them to the Emerald City on their new adventure? Only time will tell. But history is not on their side. In other words, Aqua Unit Patrol Squad 1 may not be “#1 in the hood, G!”