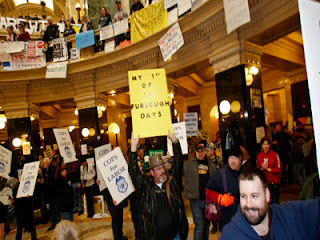 In just a matter of days, Cheesehead nation has transformed from a state celebrating a Green Bay Packers Super Bowl victory to looking like the new “Beirut On The Lake”.

With the Wisconsin legislature producing a new 21st century version of Council Wars, the fracas over unions is drawing viewers to Milwaukee’s local newscasts, according to a article in the Milwaukee Journal-Sentinel, (not to mention a lot of Winter weather.)

For the first thirteen days of the February sweeps period, Journal Communications-owned NBC affiliate WTMJ leads in the 10 p.m. late news was up 4% from last November. Weigel’s WDJT (CBS) and Local TV’s WITI (Fox) also showed gains, up 48% and 11 %, respectively in the same time frame. The biggest loser was ABC affiliate WISN, which was down 12 %. However, the Hearst-owned station’s 6 p.m. newscast still held on to the top spot (all ratings measured on a household basis as Local People Meters have yet to arrive in Milwaukee.)

Traffic has also increased dramatically at each of Milwaukee’s network affiliates’ websites – page views have more than doubled, and the same holds true for the Journal-Sentinel’s site.

For those of you not familiar with Chicago politics, the words “Beirut On The Lake” and “Council Wars”  were used to describe the chaos surrounding the Chicago City Council in the mid-1980’s between the aldermanic factions of  late Chicago Mayor Harold Washington (who was elected as the first black mayor in Chicago history) and his nemesis, 10th Ward Alderman Ed Vrdolyak. The “Vrdolyak 29” (as in 29 aldermen) formed a voting bloc and blocked any legislation proposed by Washington and his reform-minded allies, and the clashes often turned into a bitter, ugly, racially polarized affair, which hurt Chicago’s image worldwide and continues to do so to this day.

Chicago comedian Aaron Freeman (who had a weekly local late-night talk show on WPWR-TV in the 1990s) coined the phrase “Council Wars” and wrote a Star Wars-like parody on the subject.

The use of those phrases can be applied here (minus the racial polarization aspect, of course) to describe the ongoing saga going on in Wisconsin’s legislature. But with a major difference: Mayor Washington’s aldermanic bloc never fled to Indiana or any other state to avoid a crucial vote.