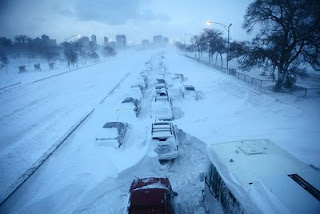 Yes, February has been one hell of the month, with a historic blizzard (the most snowfall ever recorded at one time for the month) and late-season cold snap that paralyzed Chicago earlier in the month. Even The T Dog Media Blog didn’t escape winter’s fury as the world headquarters went without both heat and power for 20 hours at the height of the storm and the blog was put on hold for a week due to storm clean-up duties.

But with the snow gone (for now), it’s time to catch up on the winners and losers in media:

Cups of Hot Chocolate All Around

The Green Bay Packers. It pains me to say this, but… nah, I’m not saying it.

The Chicago Bulls. While some team north of the state line is celebrating some kind of championship, we could have one in June here in Chicago – and I’m not talking about the Blackhawks (remember them?) Ratings for the Chicago Bulls are through the roof, thanks to the team’s success this year – averaging a 4.1 household rating so far this season, up 130 percent from last year. The Bulls are in first place in the NBA’s Central Division at the All-Star Break for the first time since the Michael Jordan era (1997-98).

Jeopardy! and Watson. CBS Television Distribution’s long-running game show featured a three-day tournament pitting contestants Ken Jennings and Brad Rutter against IBM Supercomputer Watson. The matchup was a ratings success, averaging a 9.1 household rating in the overnight markets, up 30 percent from Jeopardy’s February 2010 average. As for the tournament, Watson wiped the floor with Jennings and Rutter. What’s next for Watson? Play against the Cleveland Cavaliers and beat them by 40 points.

Wow, where to begin…

Midseason Flops. This season’s midseason entries – The Cape, Bob’s Burgers, Chicago Code, Harry’s Law, Off The Map, and Perfect Couples are all getting buried in the ratings. Not exactly a vote of confidence for prime-time network television.

Survivor. Even though it drew a 3.2 adults 18-49 rating and 11 million viewers, Wednesday’s episode was the lowest-rated premiere in the show’s history – and airing opposite American Idol didn’t help either. Meanwhile, do we need Rob and Russell back? (still like Russell, but were getting too And the Redemption Island gimmick is completely stupid, and the show continues to serve up crazy black contestants. The show’s running out of gas. Too bad idiot writers from small-market newspapers no one cares about seems to think otherwise.

Fresh FM. So CBS-owned WCFS-FM (105.9 FM) introduces yet another new morning show – this time with Scotty Smith & Rebecca Ortiz. Oh God, why Is this station still around? Yeah Scotty, beam this junk up, because this station is ready to die. Another EPIC FAIL from The Church of Tisch (also see above item.)