No cable required – the sequel 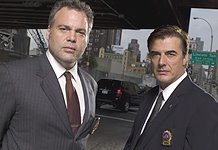 Once again, these guys are coming to you every night to a broadcast station near you.

No, you’re not looking at a previous T Dog Media Blog post. But a familiar series is coming back to daily syndication after a two-year hiatus.

NBC Universal Domestic Television Distribution announced last week it was returning Law & order: Criminal Intent to broadcast syndication this fall as a strip and cleared 90 percent of the country including the Fox, CBS, Sinclair, and Local TV station groups. Even though NBC Universal did not release a station list, it’s likely Criminal Intent will air this fall on Fox-owned WPWR-TV at 10 p.m., where Law & Order: Special Victims Unit is currently airing and ran from 2007-09 in its previous syndicated incarnation.

NBC Universal has sold Criminal Intent in a double-run as back-to-back episodes, claiming this is the first time in “more than a decade” that a syndicated off-network procedural drama has been sold as a two-hour block (actually, yours truly doesn’t remember if an off-net hour has ever been sold in broadcast syndication this way – this is nothing more than rhetoric to hype up a press release.)

On October 26, 2006, yours truly wrote an article on the first-cycle sale of Criminal Intent to broadcast stations and noted that the Law & Order spin-off was the first crime drama to be sold in syndication as a strip since 21 Jump Street and Matlock in 1990 and the first overall drama since 7th Heaven in 1999. The article also detailed the history of off-network dramas in syndication (and was fun to write.)

In September 2009, Criminal Intent repeats moved to My Network TV on Monday nights and is expected to be replaced by Special Victims Unit around the same time Criminal Intent moves back to syndication.

Criminal Intent also airs on USA Network in both first-run and classic episodes, with NBC (the network it ran on during its first six seasons) airing reruns of the USA originals. Currently, Criminal Intent is in its tenth and final season of episodes on USA.

Meanwhile, the original Law & Order also heads to broadcast syndication this fall as a weekend offering, with WPWR and a few other Fox stations on board.