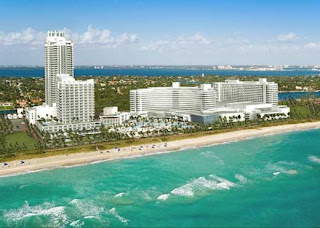 The legendary Fontainbleau Resort in Miami, where NATPE is being held

The NATPE convention rolls on in South Beach with news on Big Tigger, Daryl Hall and his house, and a new show featuring Fat Albert – whoops, I mean Father Albert

– Litton Entertainment announced it was launching a new weekly half-hour syndicated series targeted for weekend late fringe time periods titled Direct Access, which has been picked up by WCIU for this fall. The series is hosted by BET personality and syndicated radio host Darian “Big Tigger” Morgan. The new series has Big Tigger taking viewers along to check out their favorite celebrities on the music, sports, and nightlife circuits in the hip-hop world. Says Big Tigger: “I let the viewer hang out with me in all kinds of places. You’re allowed to go with me to parties and backstage – places you might not normally be able to.”

Programming to urban audiences in weekend late-night was commonplace in the 1990’s and the most recent decade with Showtime At The Apollo, Soul Train, Russell Simmons’ One World Music Beat (which had a format similar to Direct Access), and other fare.  However, stations began cutting this type of fare out of their schedules a few years ago to make room for off-network dramas and of course, more infomercials.

Access was tested on Tribune’s WDCW in Washington D.C. in its Saturday night 11:30 pm time period and was tops in men 18-34 and 25-54 demos, opposite powerhouse Saturday Night Live.

In addition to WCIU and WDCW, Direct Access has also cleared Tribune stations in New York (WPIX) and Dallas (KDAF). WCIU GM Neal Sabin says: “We are excited to join Litton and Tribune in granting Chicagoans ‘direct access’ to Big Tigg’s weekly show. We think it will resonate with the Windy City’s hip-hop culture.”

– Speaking of late-night syndicated programming, there’s  a possibility we may see more of Live From Darryl’s House, which aired New Year’s Eve locally on WGN-TV and nationally on WGN America. The special – which featured web compilations of Daryl Hall’s monthly web series of musical performances, did so well that Tribune is weighing whether there will be any future broadcasts.

Appearing at a panel at NATPE on what it takes to get an Internet show on TV, Tribune head of programming Sean Compton said Live From Daryl’s House’s original web content was a testament to the program itself, and believed more of this programming (done right) should be on the tube.

Also on the panel was Daryl Hall, who said he wanted to feature a program featuring artists making great music. To avoid television executives from controlling the product, he put it on the Internet. The success of the program has enabled Hall to upgrade production of his show, including shoot the series in HD and using state-of-the-art sound equipment.

Appearing on the New Year’s Eve special from his house was longtime musical partner John Oates, Jose Feliciano, and legend Smokey Robinson. Hall and Oates are legend themselves – to this day they are the most successful duo in music history, with many #1 singles and several Grammy Awards.

– Hey, Hey, Hey! It’s Father Albert! Debmar-Mercury and Fox Television Stations are partnering to test a daily talk show strip to air this summer featuring the controversial priest.  Father Albert is former Catholic priest Alberto Cutie, who left the church to marry. He has hosted talk shows on Spanish-language Telemundo and has authored several books. Debmar-Mercury says the show won’t be religious, but will have elements closer to Dr. Phil and The Oprah Winfrey Show. In fact, he is been dubbed “Father Oprah”.  While Debmar-Mercury plans to include New York and Los Angeles in the test, it is not known yet how many markets will participate, or if Chicago will be involved.