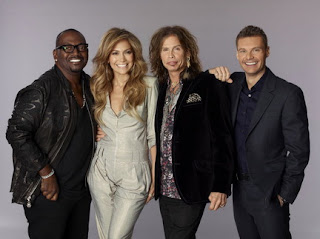 The new cast of “American Idol” for 2011, minus Simon Cowell.

Fox unveiled its new mid-season lineup late Friday and by doing so, caused a huge stir throughout the industry.

The biggest move of course, is American Idol, which now will air Wednesday night and Thursday night. The move means Idol will no longer air on Tuesday – avoiding a direct showdown with ABC’s Dancing With The Stars, which outdrew Idol in total viewers last spring to become television’s most-watched show.

This comes days after NBC unveiled its mid-season schedule, which features an all-sitcom lineup on Thursdays and the return of Parks and Recreation, Minute to Win It, and The Marriage Ref.

Idol begins with a two-hour premiere on Wednesday, January 19 (last season’s season premiere was on Jan. 11, 2010) and will air for ninety minutes beginning April 6, leading in to a new sitcom titled Breaking In. After the season premiere however, Idol will air for only an hour, followed by Human Target (got all that?) For the first time on a regular basis, Idol will face off against Survivor, whose ratings have declined since moving to Wednesday.

Thursday’s airing of Idol is at at 7 p.m. (CT), opposite CBS’ Big Bang Theory and My Dad Says,  NBC’s Community and Parks and Recreation, and CW’s Vampire Diaries (ABC has yet to schedule a 7 p.m. Thursday show.) Bones moves to 8 p.m., facing off against CBS’ CSI and ABC’s Grey’s Anatomy. Bones bumps Fringe to Fridays at 8 p.m. beginning January 28, with Kitchen Nightmares airing as a lead-in.

Other new series include the shot-in-Chicago The Chicago Code, which airs out of House on Mondays; Tuesdays will have Glee followed by new game show Million Dollar Money Drop, but on Feb. 8, Raising Hope returns paired with a new sitcom titled Mixed Signals.

On Sundays, Bob’s Burgers debuts on January 9 in the cushy time slot between The Simpsons and Family Guy. The animated series knocks The Cleveland Show to 8:30 p.m. – which in turn knocks American Dad to 6:30 p.m. (CT) on Sundays before The Simpsons. This particular move is controversial given American Dad’s raunchy content, which isn’t suitable for children.

Off the schedule and canceled are poor performers The Good Guys and Running Wilde; both will exit the schedule by the end of the calendar year. Reruns of both series are being exiled to Saturday nights (10-11:30 p.m.) for the foreseeable future (why Fox is still programming this Saturday late-night time slot is a mystery to yours truly.) Fox’s programming earlier in the evening (Cops and America’s Most Wanted) remains unchanged.

Since Fox lost the rights to the BCS Bowl Games to ESPN, the network decided to move The Cotton Bowl to January 7 at 7:00 p.m., marking the first time the bowl game has ever been held in prime-time. In past years, The Cotton Bowl was held as early at 10 a.m. The game is now held at Cowboys Stadium in Arlington, Tex.

Thought: For the first time since it had The Simpsons on Thursdays (way back in the spring of 1994), Fox is major player once again Thursday nights with Idol. Even without Simon Cowell and Paula Abdul, Idol will  draw a big number as people are curious to see how new Idol judges Jennifer Lopez and Aerosmith rocker Steven Tyler will fit into their roles.- It won’t reach the mega number it did in its heyday, but it’ll do just enough damage to competing networks on Thursday.

Idol will likely send Survivor’s ratings spiraling down even further, and deservedly so for this tired franchise.