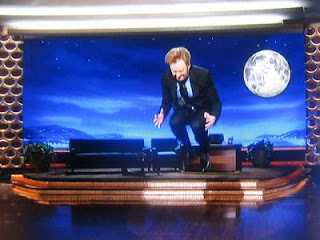 Conan’s excited to be on TBS.

Monday finally marked former NBC late-night host Conan O’Brien venture into basic cable on a network which was once stood as a momument to Ted Turner.

Conan’s conquest of the Turner Broadcasting System started in essence with an overnight rating of 2.8 for his Monday premiere. But it gets better:

– Of the 4.2, 3.2 million of those were in the prized 18-49 money demo, with put it above both The Tonight Show with Jay Leno, Late Show with David Letterman, and its direct competition of The Daily Show and Colbert Report.

As for the show itself, it opened with a skit featuring Conan O’Brien turning down NBC’s offer going to midnight (as played out last January.) So he leaves (or gets pushed out of) NBC’s Tonight Show (they say goodbye by riddling him with bullets) and starts looking for work – interviewing at the Mad Men advertising agency (where they don’t have computers or have heard of the Internet) and wound up working at Burger King (next to a person who looks like former Tribune “Innovation” Officer Lee Abrams…. yeah, looks like.)

When Conan meets with TBS executives, they’re offer is less – much less. When he seals the deal, he gets ambushed by men in suits – again – assumingly from NBC. Or the Tribune Company.

Conan goes into monologue, noting the applause lasted longer than his last job. Not excactly innovative in the skit department: One tasteless segment was the lottery drawing with the balls drawn from a sack wrapped around the front of a bear (yuck!)

A videotaped message came from Ricky Gervais – which ran way too long.

There’s a new band, and it’s name? Jimmy Vivino and the Basic Cable Band (guess Josie and the Pussycats didn’t win the gig.)

Then came the guests and the musical performance from a band nobody has ever heard of, and that was basically it.

So to sum it up, Conan was basically same old show, new channel. If he wants to keep Team Coco from breaking up, he needs to do better than this.

Ted Turner isn’t paying him money for an output like this – well, if he still owned the network.