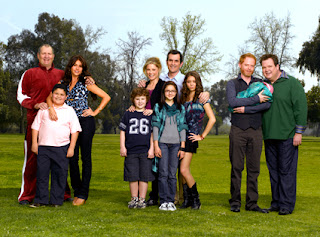 Twentieth Television made its first broadcast syndication sale of Emmy-winning sitcom Modern Family and not surprisingly, it was sold to ten Fox-owned stations, including Fox’s duopoly of WFLD-TV and WPWR-TV. The series is being sold for a fall 2013 start.

Fox also bought the program for its eight other duopoly markets, as well as WUTB in Baltimore.

This is the same group who also purchased The Big Bang Theory from Warner Bros. for off-net syndication next fall.

The cash-plus-barter sale of Modern Family is another victory for Fox over Tribune, who owns seven stations in cities where Fox has a duopoly, including the top three markets. Tribune is trying to exit Chapter 11 bankruptcy, where it has been since December 2008. The status has hindered Tribune’s ability to be competitive with other station groups in acquiring cash-plus-barter programming.

Modern Family has already won Six Emmys, including Outstanding Comedy Series in its freshmen year (2009-10) and numerous other awards, including a Peabody and Writer’s Guild Award. The program has been a ratings smash for ABC, ranking first among all primetime sitcoms among adults 18-49 so far this season.

The sitcom has an ensemble cast, including veterans Sofia Vergara and Ed O’Neill, who of course, was best known for playing Al Bundy in Married… With Children, one of the first hits for Fox (Married… was sold in syndication via Columbia Pictures Television for nearly $2 million per episode back in 1990.)

Meanwhile, the next off-net sitcom up for bids could be Twentieth’s The Cleveland Show, but how much the animated sitcom could fetch in the market is questionable, given the series has yet to stand on its own during Fox’s Sunday night animated sitcom block (currently hamhocked between Simpsons and Family Guy) – not to mention general dislike from the viewing public – just check out its user rating on metacritic.