Posted on June 1, 2010 by Terence Comments Off on Blackhawks rock the Stanley Cup house 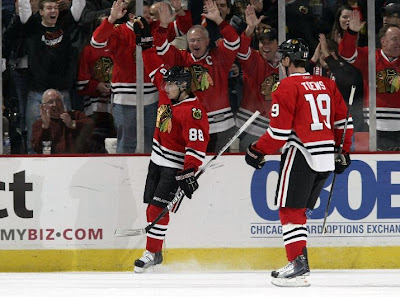 Who would’ve thought the Chicago Blackhawks would be this hot? They’re so hot, they’re melting the ice!

Game 2 of the Stanley Cup Final between the Chicago Blackhawks and the Philadelphia Flyers, set an all-time ratings record for a Blackhawks game, with local ratings reaching a zenith not seen since at least the Bears’ 2006 Super Bowl run.

Locally, the game earned a 25.1 household rating and a 39  household share for the entire game , up tremoundously from Game 1’s 16.8/35, which took place on lower HUT-level Saturday night.

Meanwhile in Canada, CBC drew 2.8 million viewers for Game 2, also up from last year. But year-to-year comaprisons are difficult because of a new ratings system implemented in Canada at the start of the most recent television season.

Not bad for a team who was all but written off for dead just four years ago, but experienced a rapid resurgence in the last two years.

Games 3 an 4 now shift to Versus, which could hurt the ratings a bit, given its limited reach and many cable systems offer it as a subscription-only in a sports tier (Comcast subscribers in Chicago can find Versus on Channel 48 on their cable system.) If there are any Games 5, 6, or 7, they will air on NBC.

Thought: Quick take on the controversy at the end of Game 2 last night between the Flyers’ Chris Pronger and the Hawks’ Ben Eager. Bad call on NBC’s part for not showing the arguement the players had each with each other when Pronger picked up and stole the puck – intended for winning goalie Antti Niemi  – and Eager gave him plenty grief (Pronger later the the puck in the garbage!)NBC didn’t show this, but CBC did- and you can watch how it unfolded by clicking here.

As for Pronger, what he did was clearly a bush-league act for an veteran player. If this were baseball, the next time he’d come up to the plate – he would be drilled. Let’s hope Pronger gets drilled repeatedly into the boards tomorrow night in Game 3. The asshole better keep his head up!