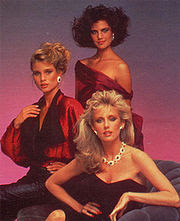 Remember the nighttime serial “Paper Dolls” with Morgan Fairchild at the helm? No? Neither does anyone else.

Recently, Vocalo.org’s’s Robert Feder unearthed the archives and presented us with one of his Sun-Times columns back in May 1984. Since Upfront Week took place two weeks ago, I got to thinking – what was it like back then when the networks trotted out all their new shows in New York?

Well, put on your legwarmers and start breakdancing – because thanks to Google archives – and what I have read over the years (which included numerous back issues of Broadcasting magazine and Advertising Age – and of course, TV Guide), we’ll flash back to those 1984 Upfronts in New York City – an event where they pretty much declared the sitcom dead and prime-time soaps with wealthy families were all the rage.

For starters, there was no Fox, CW, WB, or UPN networks yet. Cable channels like CNN, ESPN, and WTBS existed, but did not participate in the upfronts. Cable penetration was under 30 percent when the Big 3 networks controlled 80 to 90 percent of the prime-time viewing audience and was barred from syndicating their own shows (thanks to the “fin-syn” rules).

And the upfront presentations were more spread out – nearly two weeks to be exact. ABC was first on April 30; CBS was second on May 3; and NBC was last to announce their fall schedule a week later on May 10. The hoopla in Midtown Manhattan was dubbed the “Upfront Olympics”, in reference to the 1984 Los Angeles Summer Olympic Games, which ABC aired later that summer.

So let’s go back in time and head to Upfronts ’84 and see what’s coming on in the fall:

ABC: One of the reasons why ABC slid in the ratings in the early 1980’s was because they relied too much on aging hits- the same ones which helped them dominate the ratings in the late 1970’s. Their 1983-84 lineup was full of them: Happy Days, Hart to Hart, That’s Incredible, Fantasy Island, and Three’s Company. In order to freshen the lineup, all of those shows either were canceled or had their runs ended.

And so, ABC’s upfront presentation on April 30 at Lincoln Center featured eight new shows, and the success of Dynasty (the #2 show of the 1983-84 season) had an influence on at least two of the entries: a new serial titled Paper Dolls, with Morgan Fairchild battling with vultures in the fashion world; and Glitter, about the hijinks at a rich-and-famous celebrity magazine. Other new dramas included Jessie, about a police officer who gets too close to her boss; Street Hawk, about a cop who drives a motorcycle which flies like a jet; and Call to Glory, a drama series with Craig T. Nelson set on an Air Force base. Only two new sitcoms were unveiled: Who’s the Boss, a sitcom featuring Tony Danza as a male housekeeper with Judith Light as his boss; and Three’s A Crowd, a sequel to Three’s Company with John Ritter moving in with his girlfriend (Mary Carodette). The lone new non-scripted entry was People Do The Craziest Things (the title speaks for itself).

Cancellations (in addition to those mentioned above) included A.K.A. Pablo, Just Our Luck, Lottery!, and Oh Madeline.

Results: Rebuilding wasn’t easy. In fact, ABC fell from second to third place during this season, despite Dynasty taking the top ratings spot. Almost all of its freshman shows bombed – early season causalities included Glitter, People Do The Craziest Things, and second season entry Foul-Ups, Bleeps, and Blunders; and the rest barely made it through the season. Veteran The Fall Guy – which was a Top 20 performer the previous season, was clobbered by NBC’s new Highway to Heaven and moved to Thursday in 1985 where it died. Most of ABC’s mid-season entries faltered as well, except for one, which along with Who’s The Boss was another sitcom about a housekeeper – Mr. Belvedere.

CBS: CBS’ presentation came on May 3 and the Tiffany network unveiled five new series [1] at its upfront presentation: Charles in Charge with Scott Baio; E/R with George Clooney; and Dreams with John Stamos in a rock and roll band; murder-mystery drama Murder She Wrote; and action drama Cover Up.

To make room, CBS got rid of Cutter to Houston, Goodnight Beantown and Domestic Life. Bonnie Franklin’s departure from One Day At A Time ended that series’ nine-season run.

Results: CBS stayed on top of the ratings heap in 1984-85, but its ratings were starting to decline. While Murder, She Wrote became a long-time Sunday night staple for CBS, its sitcoms didn’t fare so well – E/R and Charles were both canceled after one season, but Clooney went on to star in another ER – this time without the slash -which became a big hit drama for NBC; and Charles was later successfully revived  for first-run syndication in 1987. Dreams expired after five episodes and second-season sitcom AfterMASH was mercifully canceled in December. Cover Up suffered after star Jon-Erik Hexum accidentally shot and killed himself after playing around with a prop gun. The series was gone by the following April.

Also retiring were long-running hits The Dukes of Hazzard, Alice, and The Jeffersons.

NBC: It’s back to the drawing board for NBC after the entire freshman class of 1983-84 was completely scrapped, including Bay City Blues, Jennifer Slept Here, Manimal, Mr. Smith, The Rousters, and We Got It Made (which returned to first-run syndication in 1987.) Also out was reality show Real People after five seasons.

So, Brandon Tartikoff unveiled the network’s new 1984-85 slate at its upfront presentation on May 10, [2] and it featured nine new shows: six new dramas and three new sitcoms – with the latter bunch chances of succeeding marginal at best. The six new dramas were: Highway to Heaven with Michael Landon as an angel sent back to earth; Hunter, a L.A.-based crime drama starring Fred Dryer and Stephanie Kramer; Hot Pursuit, featuring a couple who’s on thee run; Partners in Crime with Lynda Carter and Loni Anderson as female defectives; V, a sci-fi drama based on the successful 1983 mini-series; and Miami Vice, a crime drama centered around two stylish detectives.

The comedies were: It’s Your Move with Jason Bateman as a young scam artist; Punky Brewster, about a orphan who winds up with a old man; and The Cosby Show, a sitcom starring Bill Cosby as a pediatrician with a wife (whose a lawyer) and four kids.

Results: In a stunning turnaround, NBC jumped into second in 1984-85. While some shows didn’t work – Partners in Crime, Hot Pursuit, It’s Your Move (a personal favorite of yours truly) and V – a program that would somehow find its way back onto network television in 2010 – it was these shows (except Punky Brewster) that made the difference:

– Punky Brewster was not a hit with critics. Or anyone over the age of 15. But this program is still remembered fondly today (why, I don’t know), despite its low-rated two-season run on NBC and its one season run in first-run.

– Highway to Heaven wasn’t a hit with critics either, but it was a Wednesday night time-period winner, knocking ABC’s Fall Guy into oblivion.

– Hunter was another runaway Saturday night hit for NBC, improving on its lead-in and ran on NBC for seven seasons.

– Miami Vice was Friday night for NBC. The stylish “MTV Cops” beat CBS’ Falcon Crest in the ratings among young demos and became bigger in its second year, sparking a pop culture sensation.

– But the program that turned around NBC’s fortunes was The Cosby Show. The series single-handily revived the sitcom, made Thursday nights into “Must See-TV” and would help lay the groundwork for NBC to become the top-rated broadcast network the following season. Cosby sold into off-network syndication in 1986, earning a record $4 million per episode (excluding barter sales), a record which stood for more than a decade. Cosby’s halo effect also helped other Thursday night shows like Cheers, Night Court, Family Ties, and Hill Street Blues, all of which were struggling to survive before Cosby came along.

When the 1985-86 season ended, NBC finished in first place in households and key demographics.

Today, NBC sits in last place – just like it did during the 1983-84 season and the eight previous seasons.