Posted on May 11, 2010 by Terence Comments Off on Beautiful Betty tops Chicago ratings 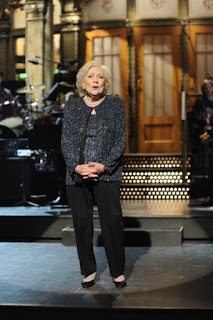 Ugly Betty may be gone from the airwaves (did anyone notice?) but Beautiful Betty is blossoming!

Betty White’s much ballyhooed hosting gig on Saturday Night Live – inspired by a Facebook campaign, won its time period with a 8.8 overnight metered-market household rating, according to Nielsen.

Among adults 18-49 in the 25 Local People Meter markets, the program averaged a 5.1 rating and 20 share, the best performance in eighteen months.

In either case, it was the highest-rated show of the broadcast day, beating every show in prime-time in households and in key demos.

In Chicago, Betty White’s hosting gig rocked the house, finishing first in the 10:30p.m.- midnight time slot in all key demos. But even more impressive, Chicago’s WMAQ finished first among all LPM markets with a 9.2/33 among adults 18-49 (barely beating KARE in Minneapolis-St.Paul) and a whopping 11.4/37 among adults 25-54 (click here and scroll down to the bottom for results from all LPM markets.)

The Betty White-hosted Saturday Night Live was generally praised by critics, with Matthew Gilbert of the Boston Globe boasting it was one of the best episodes of the season

Not a bad performance for the Oak Park, Ill. native who left a huge mark in the medium, with an Emmy-winning career stretching 60 years, from starring roles in The Golden Girls and The Mary Tyler Moore Show to guest roles in Ugly Betty, The Simpsons, Boston Legal, Family Guy, My Name Is Earl, Fame, St. Elsewhere and a lot more. She also headlined her own sitcom on CBS during the 1977-78 season, but lasted only fourteen episodes.

White also became the first female to win an Emmy for Outstanding Game Show Host for Just Men!, a short-lived  NBC daytime game show in 1983 which lasted only thirteen weeks. It would be another 22 years before another female would win the award again (Meredith Vierra won for Who Wants To Be A Millionaire in 2005.)

All in all, Betty White’s Saturday Night Live hosting gig is just another addition to her long, successful resume.