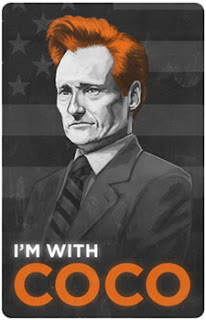 It’s something Ted Turner would be proud of – if he still owned TBS.

In a move that shocks a lot of people in the industry, former NBC late-night talk show Conan O’Brien has signed a deal with TBS to do a late night program.

Details were sketchy, but O’Brien will begin his new late night journey in November at 10 p.m. (CT), bumping George Lopez’s talk show to 11 p.m. The show is expected to air four nights a week, Monday-Thursday. O’Brien will go head-to-head with Comedy Central’s Daily Show with Jon Stewart and The Colbert Report for the same young-adult audience.

But before any fans of Lopez’s get in arms – it was George Lopez himself who suggested  to Conan O’Brien he should join the network’s late-night lineup. He reportedly placed a call to O’Brien and urged him to join the network. It got the ball rolling in O’Brien negotiations with TBS, which only took a few days.

O’Brien was in negotiations to join Fox and the those talks were reportedly making progress , but time-period issues with affiliates and the potential loss of revenue from airing successful off-network sitcoms – not to mention upcoming programs they committed those time periods for – may have derailed the deal.

Another factor is many Fox affiliates may have seen numbers Leno put up since his return to The Tonight Show – those ratings have improved in the 10:30 p.m. over what O’Brien earned in his seven-month tenure as host.

Plus another sticking point was ownership – O’Brien wanted full ownership of his show, which he gets in the TBS deal.

With Conan O’Brien coming to TBS, the move raises the profile of the channel significantly – TBS – or Superstation WTBS from Atlanta – was once known for airing The Beverly Hillbillies, The Brady Bunch, The Andy Griffith Show, A music-video show titled Night Tracks, and of course, Braves Baseball. Over the years, TBS has acquired more recent off-net sitcoms including Everybody Loves Raymond, Seinfeld, and The King of Queens among others, and branding itself as “Very Funny”. TBS has also branched out into creating original sitcoms as well, including Tyler Perry’s House of Payne and My Boys (in 2007, TBS’ national feed and its WTBS’ local Atlanta feed were separated, and the latter became Peachtree TV, or WPCH-TV.)

Currently, O’Brien is embarking on a comedy tour called “Legally Prohibited from Being Funny on Television”, since his agreement with NBC keeps him off TV until September. The tour stops in Chicago on May 19 and May 20.

And as soon as news broke, TBS already had a Conan O’Brien promo up and running, in which you can view below. And if you watch the baseball playoffs this fall on TBS – you can surely bet you’ll see a Conan promo – or eighteen.

“The good news: I will be doing a show on TBS in November! The bad news: I’ll be playing Rudy on the all-new Cosby Show.”

George Lopez’s thoughts on O’Brien leading into his Lopez Tonight via Twitter:

“I can’t think of anything better than doing my show with Conan as my lead-in. It’s the beginning of a new era in late-night comedy.”  He also dubbed the new team “Team Lo-Co.”