Canada-USA Gold Medal game scores in Chicago – and everywhere else

Posted on March 1, 2010 by Terence Comments Off on Canada-USA Gold Medal game scores in Chicago – and everywhere else 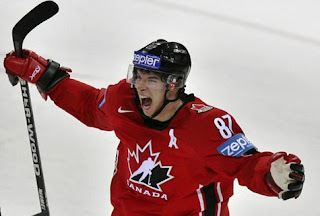 What’s the best part of the Winter Olympics? Seeing one of the best hockey tournaments in the world. And this Olympics proved no different.

The game – in which the Pittsburgh Penguins’ Sidney Crosby scored the game-winning goal in overtime to give Canada the gold medal in hockey at the Olympics – drew 27.6 viewers on NBC in the U.S., only behind the two 1980 Winter Olympic hockey games the U.S. were involved in – including the Miracle on Ice game,  which still tops ’em all with 34.2 million.

In Canada on CTV, the game broke an all-time viewing record by drawing 16.6 million viewers – besting the mark set only Feb. 12 with the Opening  Ceremonies of the Winter Olympics. At  least 80 percent of all Canadians watched some part of the game, which translates to 26.5 million viewers.

Locally, the game drew a 23.5 HH rating and a 41 HH share, making it the highest-rated hockey game in Chicago in more than 30 years – thanks in part to four Chicago Blackhawks players participating in the game. Buffalo (where USA goaltender Ryan Miller plays for the Sabres) scored the highest number, with a 32.6/51, followed by Pittsburgh witha 31.9/50 (home of Sydney Crosby.)

Another winner in this contest was the National Hockey League – all whom participated in this game plays for an NHL team. The league got the badly needed exposure they were looking for – and may cash in with this year’s upcoming playoffs – even more so if the Chicago Blackhawks – who have been setting local record ratings for Comcast SportsNet this season – make it alll the way to the Stanley Cup Finals.