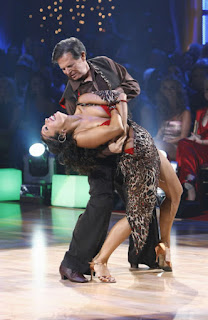 Don’t drop Cheryl, Tom! Or she’ll be like The Tribune…

All right, I’ve seen some absurd items on Chicago Tribune’s editorial page before… but this one takes the cake.

One of Wednesday’s  editorials in the paper was titled “Dancing With DeLay” , about former disgraced Texas congressman Tom DeLay competing on the newest season of Dancing With the Stars.

You’ve got to be kidding me.

From the editorial board who once complained about nice weather in January to telling Hyde Park what buildings need renovating in their neighborhood, they wasted a half-page on this nonsense.

And you wonder why Tribune is in Chapter 11.

It’s worst enough they redesigned the paper to look like a local version of USA Today, but now they devote an entire editorial to Dancing With The Stars – featuring a politician who in my opinion, has gotten way too much press coverage.

But if its good enough for Sam the Ziphead, its good enough for Chicago. When he bought the Tribune Company, we were hoping for a local media conglomerate that would keep jobs in Chicago; keeping the Windy City competitive with other media companies in New York and Los Angeles; and continue to set a gold standard in journalism excellence.

Instead, we have a company in Chapter 11 that has made massive layoffs; hiring rejects from their failed gigs at other media companies who don’t know what they’re doing; and a mess of a paper that puts celebrity stories on page 3. And of course, Zell had buyer’s remorse after the stock market and economy collapsed.  Creditors are upset, and now want an investigation into Zell’s buyout of the Tribune.

And the journalism has gone south since the redesign. Check out this post I wrote in January regarding Why Do We Live Here? (obviously not for the quality of the newspapers.) And if it’s not that, it’s the phony State of Corruption and Tribune Watchdog campaigns, coming from a company who pleads to the FCC so they can buy more papers and TV stations and eliminate cross-ownership rules, so they can easily dominate a market and charge advertisers much higher rates (and not to mention possible investor fraud in the Zell buyout.)

And for you “if it leads, it bleeds” fans, there’s the Sirens and Blotter Blog! If you can’t get enough of murders and other mayhem, this is for you! Where every shooting in Englewood is reported and idiot commenters can tell us how bad Chicago is! Wow, what a concept!

Who says innovation is priority number one at the Tribune? And today’s useless editorial is a living testament of how Sam “committed to mediocrity” Zell has completely screwed up what was once one of the finest media companies to ever be run from the Midwest. It’s now nothing more than what Clear Channel and Citadel is – an unrecognizable cookie-cutter, blandless, soulless Big Media company.

So what’s your next editorial, Trib? How actors from The Beautiful Life are taking away jobs from the modeling industry? Endorsing Lois Griffin to run for mayor of Quahog, R. I. ? Maybe you can lobby Sheldon from The Big Bang Theory to run for Cook County Board President. Or investigate taxpayer waste on the set of Two And A Half Men.

Or how about some commentary on some real news for a change instead of this pap? Hiring Cheryl Burke and Tom Bergeron to run the editorial department isn’t a good start.