The best and worst of the last three weeks:

– America’s Got Talent. Once again, the hit of the summer season with an average of 11 million viewers. And it still hasn’t found its Susan Boyle!

– Casey Kasem. Tip of the hat to the man who practically invented counting down the hits retired from the grind last weekend (though his recent shows, AT20 and AT10 – just weren’t the same compared the original American Top 40 once was.)

– 30 Rock. A very good week for NBC Universal’s critically-acclaimed sitcom with Comedy Central and WGN America paying $800,000 an episode for the Tina Fey vehicle. Oh yeah, and it was sold in broadcast syndication, too.

– Rev. Al Sharpton and Rep. Peter King (R-NY). These two complained about the media coverage of Michael Jackson for completely different reasons, if only to promote their self-absorbed asses. Two more reasons to hate New York.

– BET Awards. The tribute to Michael Jackson and the O’Jays were fine, but the rest of the show was junk, especially with Jamie Foxx as host and Beyonce performing in a ridiculous outfit. Quite what you’d expect from BET (and Aaron McGruder would agree.)

– SyFy. An executive from the Imagine Dumber network took to Twitter to explain and defend the name change, as if to persuade the legions of fanboys to change their mind about it. The execution is working real nicely – on the night of Warehouse 13’s premiere, a banner ad on YouTube promoted the show – with the old logo and the name of the channel still spelled “Sci Fi”
(click on the image below to enlarge.) 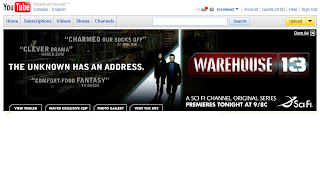