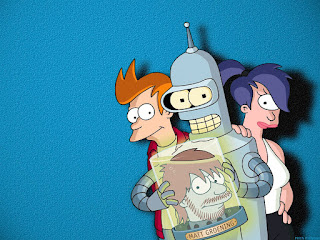 Well, how about this.

Six years after Fox canceled the series, Twentieth Television and Comedy Central have agreed to revive the animated sci-fi comedy Futurama. New episodes of the series are expected to air in mid-2010. A broadcast network window (most likely Fox) could open up as well. 26 half-hours are planned.

The move gives the series enough episodes to strip the show in broadcast syndication, which could come in either 2011 or 2012. Comedy Central currently strips 72 existing episodes of the series.

The decision to revive the Matt Groening-created series came as a result of strong ratings from the Comedy Central strip and DVD sales of the existing series – including original direct-to-home video movies. Those specs have run on Comedy Central and have performed well.

The same formula has worked out for Twentieth’s sister show Family Guy, which was canceled twice – and was revived after strong ratings on Adult Swim and DVD sales, becoming the first TV show to accomplish such a feat. The revival enabled it to enter broadcast syndication, where it has been a success story. Among off-network sitcoms, it ranks only behind Warner Bros. Two And A Half Men.

Futurama began on Fox in 1999, and had been bounced around the network’s schedule for five years, unable to gain traction with audiences, but developed a strong cult following.

After Fox’s cancellation, Futurama reruns landed on Adult Swim, where it drew a sizeable audience – particularly among males 18-34. Comedy Central surprised everyone in the industry by outbidding Adult Swim for the rerun rights, which reverted to them on January 1, 2008.

As for the revival, much of the original voice talent is expected back, including Billy West, Katey Sagal, and John DiMaggio.

And Twentieth may not be done yet: the studio is in talks with TBS to air at least thirteen new episodes of My Name Is Earl, which acquired the cable rerun rights to last year. NBC canceled the series a month ago after four seasons (UPDATE – Negotiations between TBS and Twentieth have fallen through, meaning “Earl” is officially dead. – T.H. 2009-06-11.)