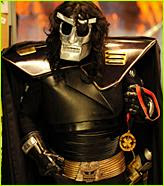 Remember when I said Darkmane (from those X Games spots) couldn’t foil the X Games but could show up at Wrigley to foil the Cubs chances at going to the World Series?

Not only he succeeded, but he also managed to find time to show up at U.S. Cellular Field to foil the White Sox’s chances, too. Leave it to a character created by ESPN to promote (if you can call it that) last summer’s X Games to summarize what has gone wrong with the month so far (and judging by his MySpace page, Darkmane would make a great radio executive…)

Welcome to Floptober, the month of shocking surprises and twists and turns – more of them than you find in a pretzel.

What a month so far – and it’s only eight days old. The theme of the month is the song Free Fallin’ by Tom Petty. It’s going to be played all month long.

The Chicago Cubs, who were favorites to win the World Series for the first time in one hundred years, were swept by the Los Angeles Dodgers in three, breaking the hearts of Cub fans everywhere. That was followed by the White Sox being eliminated from the preliminary round by the Tampa Bay Rays two days later, creating a spectacular baseball playoff flop for the city.

On September 21, the Chicago Bears lost to the Tampa Bay Buccaneers. So now we can’t beat teams from Tampa? When did this happen? I hope the Blackhawks can beat the Tampa Bay Lightning this season – it’s our only hope…

If it isn’t the Cubs and White Sox, it’s the stock market and the economy, which continues to bottom out every day. Congress recently passed a $700 billion bailout of Wall Street. Wow, more money coming out of our pocket, making you and me more broke.

And if it isn’t that, it’s the Oakland Raiders, who continue to re-define “Commitment to Excellence” by firing their coach in the most embarrassing way possible. Owner Al Davis is actually making the late Bill Wirtz look good. Maybe Davis should black out home games next – oh wait, that’s probably happening, with the NFL doing the job for him because nobody in Oakland wants to go to Raiders games.

And if it isn’t that, it’s the fading fortunes of the broadcast networks’ prime-time schedules, whose ratings are down 5 percent from a year ago with season premieres of Grey’s Anatomy, Private Practice, Ugly Betty, House, The Simpsons, Family Guy, and others all down from last year. Fox has already canceled Do Not Disturb, with Hole in the Wall likely next. And The CW continues to stumble, even though their Monday night lineup has stabilized. Have you looked at the ratings for their new outscored Sunday night lineup from Media Rights Capital? Even The 700 Club draws better ratings than this sorry group of programs (though I’m rooting for Easy Money to at least draw a decent number.)

And let’s not forget the ultimate symbol of Floptober: Heroes, whose amazing ratings and creative decline have even hard-core fans giving up on the show (I’ll have a future Think Tank on this.) If I wanted inconsistent material, mediocre performances, and people who just don’t outright give a shit anymore, I’ll watch the Detroit Lions (or a Cubs playoff game.) Sylar, Hiro, Roy Williams, Carlos Zambrano, what’s the difference?

And not even radio have escaped from Floptober, as two radio stations in Peoria recently closed their doors and a possible debacle involving Arbitron’s new Portable People Meter looming.

And hell, not even ultimate fighting escaped, with one of the more established and well-known stars of the sport (Kimbo Slice) losing in the first round in fourteen seconds in an Elite XC match Saturday night to an unknown fighter who was a last-minute replacement for Ken Shamrock in the main event.

And to top it off, it’s election time so we’re punished further with campaign ads featuring self-serving windbags who make promises and later do nothing.

So there you go. If October 2008 will be known for anything, it’ll be known as Floptober. So boys and girls, get on down there and join Darkmane’s Army. If you want to be a winner, this is the place you want to go, because it seems Darkmane has been winning all month long.