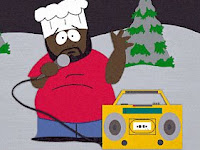 Though TV fans knew Isaac Hayes as the voice of Chef on South Park, he was much more than someone behind a cartoon character.

Isaac Hayes was a Grammy-Award winning artist who composed the score in the movie Shaft, and his groundbreaking soul music paved the way for the “smooth era” in soul music, which helped launch the careers of Barry White, Teddy Pendergrass, and Luther Vandross.

Hayes died Sunday at his home in Memphis, found unresponsive. He was 65. As of this writing, the cause of his death was unknown. His death comes only a day after comedian Bernie Mac passed. Hayes appeared on The Bernie Mac Show and co-starred with him and Samuel L. Jackson in the movie Soul Men, due out later this year.

Hayes was born in Convington, Tenn. in 1942, and moved to Memphis when he was 6.

Hayes first album was Hot Buttered Soul in 1969, which featured him singing in a “cool style”, as well as peppering his songs in spoken-word, actually rapping before it was known as rap.

On November 20, 1971, Hayes scored his first number one single with The Theme From Shaft, a song which was featured in the opening credits of the movie. The song entered Billboard’s Hot 100 on October 16, 1971 and raced up the charts to the top spot five weeks later. He performed the song at the 1972 Academy Awards telecast to rave reviews. The song and the score won him two Grammy Awards. He won another Grammy in 1972 for the album Black Moses. He was inducted into the Rock and Roll Hall of Fame in 2002.

Hayes was an significant part of Memphis-based Stax Records, and was also a songwriter teaming up with David Porter to compose songs for Sam and Dave (Soul Man) and Carla Thomas. He was inducted into the Songwriters Hall of Fame in 2003.

Hayes also composed songs for the movies Tough Guys, Truck Turner, and Beavis and Butt-Head Do America, where he sung on Two Cool Guys.

In 1976, Hayes declared bankruptcy after the Stax label fell on hard times. He was recording again in 1979, after he signed on with Polydor.

In 1997, Hayes was hired to voice Jerome “Chef” McElroy on the TV series South Park , where he was a former musician who wound up as the South Park Elementary chef, spenting time singing a lot of racy songs. A CD titled Chef Aid was released in 1999. Based on an episode of South Park of the same name where Chef goes bankrupt and tries to raise money to pay off his debts, the CD featured Hayes in his “Chef” character and had a complication of artists including Elton John, Meatloaf, and Rick James. Hayes also contributed music to the series.

In 2006, Hayes left the show in a dispute with South Park creators Trey Parker and Matt Stone after the duo mocked Scientology, though Hayes had decreased his role in the show prior to his walkout. The duo decided to kill off the Chef character in the tenth-season premiere episode titled The Return of Chef, featuring voice-tracked, strung-together quotes by Hayes. The episode was not well received by fans, causing some to suggest South Park had “jumped the shark”. Still, the program scored its highest ratings in four years.

In addition to South Park, Hayes made numerous other television appearances over the years, including The Rockford Files, The A-Team, Hunter, American Playhouse, Tales from the Crypt, The Fresh Prince Of Bel-Air, Girlfriends, and The Bernie Mac Show. Film credits included Tough Guys, Escape from New York, I’m Gonna Git You Sucka, Hustle & Flow, and of course, as Chef in South Park: Bigger, Longer, and Uncut. A few years ago, he appeared on the TV series Stargate SG-1 as Tolok.

Hayes was also working on a new album for the newly-revived Stax records.