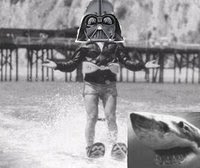 This has been a tough 31st year for Star Wars, and it seems this franchise’s soul has been left in a galaxy far, far away.

First, it was the all-Star Wars edition of Deal or No Deal last spring that was the wake. Now comes the burial: Star Wars: The Clone Wars movie – which is to set up the animated TV series on the Cartoon Network this fall – has been hit with almost unanimously poor reviews, absolutely no buzz, and indifference from some Star Wars fans.

As of this writing, the rating on Rotten Tomatoes’ movie review web site is rotten indeed: only 19 percent. By comparison, Tropic Thunder – a movie that also came this past weekend, scored a 84 percent rating. The Dark Knight – the movie blockbuster of the summer – scored a rating of 94 percent.

While the pilot of the TV series played to rave reviews to critics at the TCA tour and to satisfying crowds at Comic-Con, it is somewhat of a shock to find the movie getting poor reviews – from critics and some fans alike. Clone Wars took in only $15.5 million at the box office this past weekend – which may not be a good sign for the TV series. Perhaps this should have premiered as a two hour made-for-TV movie event instead – that’s how you get people to sample your program- not forcing them to fork out sixteen bucks to see it in a theater.

And notice the lack of marketing tie-ins to Clone Wars – how can you launch a movie like this without a marketing tie-in? You do so, even if the movie is an “afterthought”. Even a deal with some dopey chain like Happy Burger to sell some flimsy soft drink cups would have sufficed.

Even worse, Cartoon Network still hasn’t officially specified a premiere date for Clone Wars. One report stated August 10, which turned out to be incorrect. (Another report surfaced stating the series premieres on October 3, but this hasn’t been verified by Cartoon Network.) Other networks – broadcast and cable – have set confirmed premiere dates for their fall programs already – why hasn’t Cartoon Network done so with Clone Wars?

I haven’t seen the movie yet, but still plan on doing so. But all of a sudden, I’m not as pumped about Clone Wars as I once was – thanks to the way this project has been handled – or mishandled – by the parties involved.

Use the force, Clone Wars. Because it looks like you’re gonna need it.