It’s King of this Hill 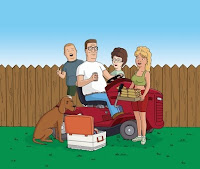 While the other animated comedies have been hit-or-miss this season (quite often on the miss side), there is one under-the-radar show that has been consistent.

Fox’s King of the Hill is coming back for its thirteenth season with thirteen episodes. All the show’s principals are returning, including creator Mike Judge.

Hill doesn’t garner the same type of attention The Simpsons, South Park and Family Guy gets, but that’s just fine with the cast and the show’s fans.