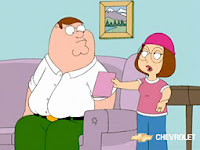 On Hulu, this Family Guy moment is presented to you by Chevrolet.

NBC Universal and News Corp. are finally opening up its video-streaming service Hulu to the public today, after nearly five months in private beta.

Hulu features TV programs from NBC Universal and Fox parent News Corp., not to mention other content providers, including the NBA, MGM, Sony, Lionsgate, and Warner Bros. Television. Shows being streamed include current series such as Family Guy, The Simpsons, and House, and classics such as The A-Team, Bewitched, and The Bob Newhart Show.

Not all content providers are on aboard however, as the company with the biggest television library (CBS) is not on board, and neither is Viacom or Disney/ABC.

Full-length movies are also available to stream, including Ice Age and The Jerk.

Meanwhile, Hulu is hoping the advertising is has on its site is aimed to engage viewers, not annoy them (though the ad bugs on-screen might be a bad idea… )