The "Price" was definitely right 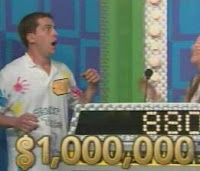 While Deal or No Deal couldn’t give away one million dollars on their show (even after filling thirteen suitcases with the prize), the prime-time version of The Price Is Right and host Drew Carey actually went out and did it – when contestant Adam Rose came within $880 of the actual retail price in the Showcase Showdown. Rose not only walked away with the showcase, he also walked away with a cool million (Rose won a total of $1,153,908 in cash and prizes. Not bad for a teacher!)

So while Price may not match Deal in the drama department – or in the ratings – at least Price did something that Deal has not done to this point – make someone a million dollar winner. And to this game show fan, Deal needs to get serious and cut out the gimmicks and speed up the game – before the viewers start to bail. And with the program entering first-run syndication as a daily strip in September, it needs to do this and fast.

BTW: In case you’re wondering – yes, there is a connection between the two shows – somewhat. Claudia Jordan (Suitcase Model Number 1) was a Barker Beauty on Price before she joined Deal in 2005. So, what were her days on Price like? Don’t ask.