Posted on February 25, 2008 by Terence Comments Off on T Dog’s Think Tank: Did "The Simpsons" Jump the Shark? (Updated) 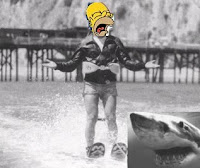 Originally published on January 30th, but slightly re-written to further explain why the show finished first on the Excellent 10 list last year and to address the series’ last few seasons.

When I read the synopsis for January 27th’s Simpsons episode That ’90’s Show, yours truly was worried. Really worried. Meredith’s ferry boat crash-worried. Well, I tuned in, and my worst fears were confirmed…

Holy Humdrum, Batman, what the heck was that? This episode was so bad, The 700 Club marathon that aired earlier that day was funnier. Who wrote this episode, the Cavemen staff? (all right, the “Weird” Al bit and the President Bush joke at the end were funny… but it was the only times I laughed while watching this.)

And the fanboy reaction was quite what I expected (split.)

So I guess continuity doesn’t matter in this series anymore. For those of us whose been with the series since day one, this episode was the ultimate slap in the face – though I concede younger viewers than me (I’m 35) and newbies probably won’t have a problem with it.

As long-time fans know, the backstory of the show had Marge and Homer meeting in high school in 1974, marrying in 1980 (the same year Bart was born), having Lisa in 1984, Maggie coming along later in the decade, and so on.

But now with That ’90’s Show, they changed the backstory completely (a writing no-no), with Marge and Homer meeting in the 1990’s with a ultra-lame plot around Marge dating a college professor. Homer is so ticked off, he invents grunge. At the end of the episode, I was hoping Marge would wake up and find Homer in the shower and it was all a Dallas-inspired nightmare.

Instead, it was this episode that was a nightmare. I guess cutting the show mid-scene Sopranos-style with Lisa trying to parallel park outside was too easy.

And to think yours truly picked this show as the number one show of 2007 over Family Guy and South Park. Rest assured The Simpsons won’t be number one in 2008.

The season started off great for The Simpsons, its 19th, coming off the momentum of the success the franchise had at the box office last summer. What happened? It’s quickly running out of gas faster than the 2007 Detroit Lions. Did they suddenly hire Matt Millen to supervise the writing staff? The letdown curse strikes again.

Ah, the 2007-08 season. The season of the letdown. Top Model, Survivor, Heroes, Ugly Betty (ratings performance only), the Bears and the Bulls. And to top it off, a writer’s strike. And now, The Simpsons. Is it time for yours truly to invest in some new programming incentives? I’m going to have trouble finding even five shows to put in the The Excellent List for 2008. Can reruns of M*A*S*H count? Don’t be surprised if Pardon The Interruption is this year’s number one show, in which Armageddon truly has come.

Some say The Simpsons stopped being funny around Season 11 or so. They may be right, but it did manage to spurt out a couple of funny episodes a season since then. But even those have come few and far between lately, especially in the last three years. I’m sorry, but the writers are clearly out of ideas after nineteen seasons if they have to resort to rewriting the series’ backstory, and relying too much on tired gags and plots. This awful pace picked up in the series’ last few episodes.

So, why did yours truly make it number one for 2007 on the Excellent 10 list? Because there were really no other options left, with South Park, Family Guy, and Heroes also in creative decline (plus I gave The Simpsons Movie a lot of credit. Perhaps too much credit.) It wasn’t easy putting that list together.

The lesson learned here is, maybe we shouldn’t invest so much time and energy and emotion into a TV show. People who do this are often mocked by people who actually have lives. Ask any Star Trek or Lost fan. It’s not easy being a fanboy (I should know.)

So yes, I think The Simpsons Jumped the Shark after the January 27th episode. But who knows? Both Grey’s Anatomy and the WWE jumped the shark last year, and they are as popular as ever. It defies all common sense, which seems to be lacking in television today and the public couldn’t care less. Today’s audiences – especially younger viewers – watches television passively, not actively. If we had quiz show scandals today, it wouldn’t be a big deal. If you live in the Chicago area (where scandals are about as common as snow in the wintertime), you know this already.

And so, the writers finally returned from the picket line, ready to write again. But the way this current season has collapsed for The Simpsons, their writers should stay there.