Fox to proceed without McFarlane for new "Family Guy" episodes 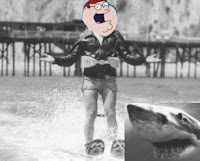 Get your jet skis ready, because there’s gonna be a show.

Fox is apparently proceeding with the production of new Family Guy episodes, without the input of creator Seth MacFarlane, who is on strike with the rest of the Writer’s Guild, and has refused to work on the series. The first of those “strike affected” episodes will air, starting this Sunday.

MacFarlane provides many voices on the show, including Peter, Brian, and Stewie.

There is no word if Fox will replace MacFarlane’s voice on the show for the time being.

This is not the first time this has happened:

– In 1962, Daws Bulter (best known for voicing Yogi Bear) stepped in for Mel Blanc to do the voice of Barney Rubble on a few episodes of The Flintstones after Blanc was involved in a major auto accident, which left him hospitalized for weeks and unable to work.

– Phil Morris stepped in for Eddie Murphy to voice Thurgood Stubs on The PJs for a few episodes after Murphy reportedly refused to work on the show because of a dispute with Fox over the program’s time period scheduling.

– John Kricfalusi was the voice of Ren on Ren & Stimpy, a series he created for Nickelodeon. He was fired from the show in 1993 after repeatedly clashing with the network over the program’s content. Billy West, who already voiced Stimpy on he show, also took over the voicing chores for Ren. (Kricfausi however, did return to work on Ren & Stimpy when it returned to TV via Spike a few years ago.)

– West and Scott Innes both did the voice of Shaggy in the first few Scooby-Doo direct-to-home video movies when Casey Kasem (who regularly does the voice) wasn’t available.