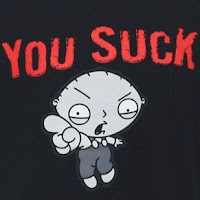 Family Guy and American Dad creator Seth McFarlane, who is doing Family Guy Live at the Chicago Theater tomorrow night, is interviewed by both the Tribune and Sun-Times and talks about Family Guy (of course), the FCC, and South Park’s recent zing (in “Cartoon Wars”) at his show, and comparisons to The Simpsons.

Family Guy Live! is playing at the Chicago Theater for one night only with two shows – one at 7 and the other at 10. The cast features Alex Borstein (who grew up in Chicago), Seth Green, Mila Kunis, Mike Henry, and of course, Seth McFarlane.

-The season premiere of Family Guy is at 8 p.m. (CT) Sept. 23 on Fox (Tivo and VCR alert: The Bears are playing at the same time.)

-Family Guy also started its off-network run this week in syndication. The show runs Monday-Saturday at 6:30 and Sunday-Friday at 10 on WGN-TV.

-Family Guy: Volume 5 comes out this Tuesday on DVD.

-And yes, you can still catch Family Guy on cable on Adult Swim and TBS. Check your local listings for times as they do vary.

-Unfamiliar with Family Guy? The Tribune has a cliff notes’ version.