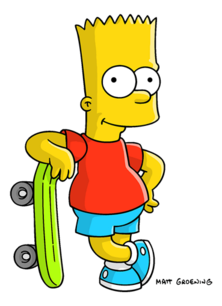 That’s right. You heard me. Bart Simpson this week is picking NFL games on FoxSports.com. (If you’re a gambling man, don’t take his advice. He thinks the Chiefs play in St. Louis.) He said he once drove to Cincinnati (no doubt to loot in the 2001 race riots), and the Pilgrims still live in New England (obviously next door to his other father, Peter Griffin.)

Yeah, and next week, Eric Cartman will be making the picks – he hates San Francisco (too many hippies), he’s picking the Broncos to win (of course), and he thinks the Rams still play in Los Angeles.